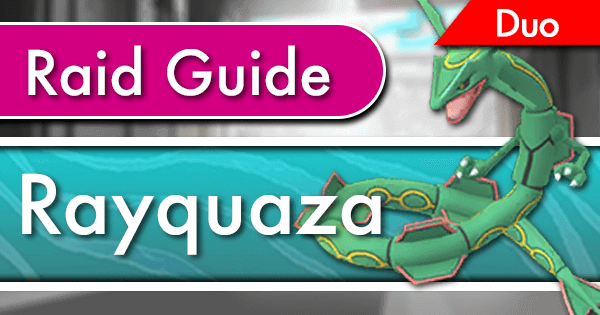 Rayquaza is one of the easiest five-star bosses to duo in the entire game given the right counters, and it keeps getting easier with every new generation, it seems. Ice types are definitely the way to go in this raid, as low defenses compounded by a double weakness to Ice are the crux of this raid's ease. For example; level 20 versions of Mamoswine can theoretically duo a Ray, though the number of deaths makes this pretty impractical. You can get 6 weather boosted Swinub, bring them up, and have a duo ready with minimal investment. IVs don’t make a material difference. Two teams of 6 0/0/0 level 30 Mamoswine can easily duo vs all movesets. There’s no excuse to run this in large groups.

The snowy solo is impossible due to how many times you'll wipe out, and how much HP Rayquaza will regen.. The “fake” solo (fight with a best friend who doesn't do any damage) in snow is doable assuming minimal boss regen, though the number of deaths vs Outrage is likely too high.

Counters viable at Lv.35, but not Vs. Outrage

I'd like to acknowledge the anonymous heroes of remote raiding
There’s a lot of frustration about random remote raids, the idiots who invite people…
Usless mon that are safe to transfer
so I’m working on cleaning up my box right now cause I’m at cap and I’m still trying…
Has anyone worked out the raid achievement logic yet?
When these achievements came out with the Together we Raid update I was quite excited,…
Help with GBL please
Hi, I really enjoy doing battles in GBL, but ever since we looped back into Great…
15-15-14 Mewtwo worth XL-ing?
The best IV Mewtwo I’ve been able to get is a 15-15-14 (two of them),but pvpoke saying…
Read More