This is an article I never thought I would have to write. I never thought I would find it necessary to actually go about defending and hyping up Shadow Mewtwo, but this week I’ve seen some chatter and a lack of enthusiasm about “another repeat” that compels me to do so. After all, Mewtwo is the original apex powerhouse! It’s the Kanto endgame boss with power undeniable…or so I thought.

But not every trainer can or is willing to go for hardcore raid optimization. Maybe they are missing the Legendaries. Maybe they would prefer to spend their dust on PvP Pokémon. And maybe they just don’t want to get into a grindy and expensive loop of building a whole bunch of level 50 Legendaries. Preparing a roster of the best of the best raid counters that cover every typing scenario is a daunting and expensive process, but imagine if you could reduce that cost and work while still maintaining an effective and impressive arsenal of raid teams. Enter Shadow Mewtwo.

A couple quick notes on how I went about my analysis. First, for this article I will only be comparing Shadow Mewtwo against other non-Megas. In most cases a Mega will be the best raid counter for a given raid boss, but you can only have one active Mega at a time, so you still want/need other good mons for raid teams. Second, to compare raid counters I will be leaning a lot on the DPS^3*TDO metric from the Comprehensive DPS/TDO Spreadsheet. I think it’s a better gauge of raid strength than DPS (Damage per Second) or TDO (Total Damage Output) alone. It places a majority emphasis on DPS while doing a decent job filtering down things that are super frail.

With that out of the way let’s dive right in and see what Shadow Mewtwo has to offer!

One thing that people have always said about Mewtwo and now about Shadow Mewtwo is that it is an incredible generalist, but what does that mean? Well, imagine a typeless Raid Boss with no weaknesses and no resistances. What non-Megas would be the best counters for that? Here’s a table with a selection of the best options. 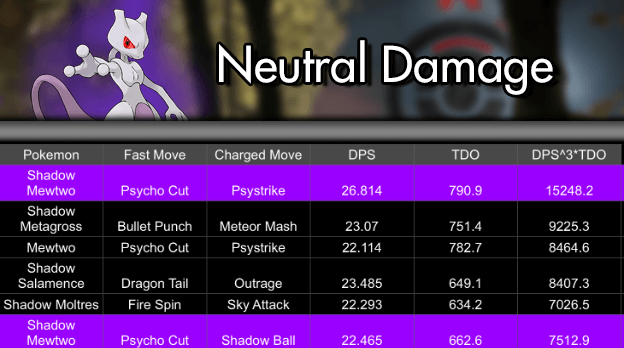 Shadow Mewtwo is simply in a class of its own as a generalist.  Of course, this imaginary “neutral” Raid Boss doesn’t exist. Pokémon have typings that confer weaknesses and resistances to certain types of damage and in turn make certain attackers better or worse. What this does tell us though, and where this saves us some time and research is that we can pretty safely assume that any time a Raid Boss is weak to Psychic (and doesn’t have double weaknesses), Mewtwo will be a top or best raid counter available. Let’s test this on Terrakion, a Fighting/Rock type Legendary.

Even when competing against powerhouse attackers like Shadow Metagross and Shadow Machamp, Shadow Mewtwo reigns supreme.

Something I’ve seen thrown around is that Mewtwo is overrated because Psychic type damage isn’t that important. And while I do agree to the extent that Psychic type damage isn’t the most vital thing for 5 star raids, I think Mewtwo’s damage output with Psycho Cut into Psytrike is still very valuable. There are limited Fighting types and actually zero Poison type Legendaries in the game currently, BUT there are Poison type Megas, Poison type Ultra Beasts like Nihilego and Nagandel, and eventually there will be the Poison/Dragon, Eternatus. Psychic may not be the most valuable type out there but that’s still a nice list of things to have coverage for.

This and Shadow Mewtwo’s value in Rocket Battles are already enough to declare it a great PvE investment. And that’s before you start analyzing Mewtwo’s with its other Charge Moves!

Cat of All Trades: Mewtwo’s Other Moves

For instance, let’s take a look at the future Mega Raid Boss, Mega Mewtwo Y. What would you think would be some top non-Mega counters against this Psychic type? Shadow Ttar? Hydreigon? Well what if I told you…

Let’s analyze the future Mega Rayquaza Raid. Rayquaza is famously double weak to Ice, so there’s no way that Shadow Mewtwo could compete with raid counters that use both Ice type Charge Moves AND Ice type Fast Moves right?…right?

Shadow Mamoswine is the clear top dog (pig?) here. No debate about that, but look at how well Shadow Mewtwo competes with other top Ice type attackers like regular Mamoswine and Galarian Darumaka. Amazing stuff.

Now this crossover power does have its limits. See how Shadow Mewtwo struggles to keep up with the other top raid counters for Kyogre raids.

*Electric and Grass raid counters continue to be busted*

and how it lags behind Dark type titans as a raid counter for the future Psychic/Ghost type legendary, Lunala

So while it has a lot of utility, Shadow Mewtwo is not some cheat code raid counter invalidating all other Pokémon.

The takeaway here is that Shadow Mewtwo is an amazing amazing AMAZING Pokémon for raids. It can be an S tier raid counter against Fighting types, Poison types, Psychic types and Ghost types while having the upside of being a pretty darn good attacker in other raids using its elemental coverage moves. Shadow Mewtwo is going to be one of if not the best bang for the buck raid counters in your inventory.

Like I mentioned earlier, building an “optimal” raid raid roster is daunting and expensive. You need a lot of level 50 Legendaries and Shadows. That’s a lot of XL candy, often locked behind raids or rare spawns. Shadow Mewtwo, especially one at Level 50, is a great way to patch the holes left behind by things you either don’t want to or can’t build. This is especially true if you aren’t planning on taking full teams of the other raid counters to level 50.

Let’s take a look at that Kyogre raid again, but now let’s compare the best counter, Kartana, at level 40 to a level 50 Shadow Mewtwo.

And let’s do the same with the Lunala raid and its best counter, Shadow Tyranitar; another Pokemon with XL candy that is harder to come by.

Level 50 Shadow Mewtwo will often come close to or eclipse the DPS of the level 40 versions of “better” counters. This means that a maxed out Shadow Mewtwo can act as great depth and replace a lot of dust and passes worth of Legendaries and Shadows towards the back end of your other raid squads.

One more thing in my notes that I almost forgot to mention: even if you don’t plan to take Shadow Mewtwo past level 40, it’s still an amazing PvE investment. The level 40 may not be as formidable with its elemental coverage moves, but it’s still a top notch generalist and Psychic type attacker. In fact, a level 40 Shadow Mewtwo still outpaces a level 50 regular Mewtwo!

Let’s compare the two against the imaginary “neutral” Raid Boss

So even if you’re only building regular Mewtwo to level 50, Shadow Mewtwo is still an insanely strong PvE pickup.

I’m mostly skipping over Shadow Mewtwo’s PvP potential in this article. I’m doing this for two reasons: 1) the overwhelming reason to farm and build Shadow M2 is for PvE, so any PvP potential is just extra upside and 2) its PvP potency is somewhat sketchy and niche. It’s a meme in the Great League. Its best spot is in Master League, where it’s fine, but the Regular Mewtwo is probably a better and more consistent option.

That being said, it’s a fun and spicy pick. So if the idea and dream of absolutely melting things with Shadow Mewtwo is enough to motivate you to farm for and build one…dont let me discourage you.

Strong attacking Pokémon are great at battling Rockets and taking advantage of their trademark pauses. Shadow Mewtwo is no different and especially excels against Poison grunts, Fighting grunts, and certain Leader lineups.

If a different brand new Pokémon was released today and it was a top tier or best raid counter against 4 different types and had solid upside as a good raid counter against several other types, every content creator would be pushing out videos about it and everyone would be going nuts about it on Twitter. I’m not 100 percent sure why Shadow Mewtwo’s return isn’t getting the same universal love. Hype fatigue? Maybe people are underestimating the utility and value that Shadow Mewtwo provides? Who knows. But make no mistake: Shadow Mewtwo is an absolute monster and it is definitely worth sinking a handful of banked Super Radars into the pursuit of a good one. I wish you a great Rocket Takeover and the best of luck on getting good Shadow Mewtwo IVs. 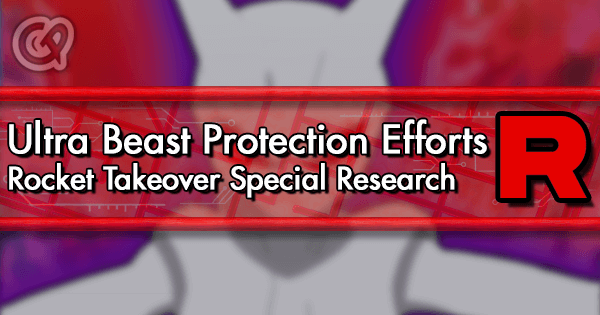