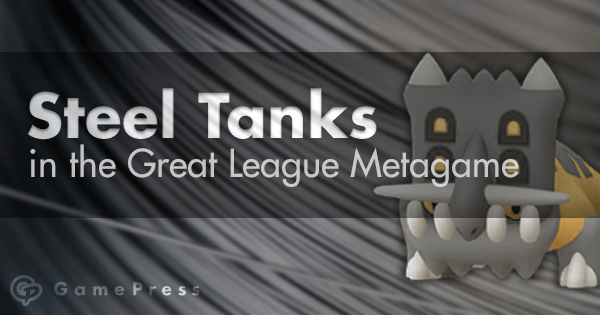 A Brief History of Steel Tanks

When PvP launched back in December of 2018, the meta was pretty centralized around Azumarill and Altaria. Azumarill, at this point, typically passed up Hydro Pump to run the Bubble + Ice Beam and Play Rough set. Altaria, as she does to this day, brought Dragon Breath + Sky Attack and Dragon Pulse. Due to a surprisingly limited collection of Pokémon, the only Pokémon that could effectively hard counter both was Melmetal, the very first Steel Tank. Soon, during January’s Boulder Cup, Skarmory became recognized as a top threat, further cementing Melmetal’s power. At this point, though, Meltan candy was relatively difficult to access, and Steelix gained prominence as a sort of budget steel option. Its Skarmory matchups were less dominant, but it was absolutely more affordable, and it could wall Melmetal hard. Later in the year, Bastiodon and Probopass became available, and absolutely made their mark on the Great League metagame. Over time, the Steel Tank role has become ubiquitous, with one of these showing up on almost every team.

Who Are the Steel Tanks?

All four of the Steel Tanks are, unsurprisingly, Steel-type. This gives them all a weakness to Fighting- and Ground-type attacks. Therefore, they will have a bad time against Pokémon with Fighting-type moves such as Medicham, Deoxys (Defense), and Lucario, and against rapid Ground-type offense from Pokémon like Whiscash, Quagsire, or Swampert, which most of them can’t even touch offensively.

Probopass and Bastiodon are both Rock/Steel type, making them better defensively against Normal, Flying, and Fire, and worse against Fighting, Ground and Grass.

Steelix, on the other hand, is Ground/Steel, which isn’t quite as fantastic for general resistances, but does provide a key double resistance to both Rock and Electric, giving it a unique anti-meta role which will be discussed later.

What's Unique About Them?

Melmetal is fast. With Thunder Shock (1.5 DPT/4.5 EPT) and the highest attack stat of the four, Melmetal is capable of pushing out damage way more effectively than any of the other tanks. Its monotyping means it resists Grass, and doesn’t take Super Effective damage from Water. However,  Melmetal’s increased offensive abilities come at the cost of a huge amount of bulk. This mon is by far the least tanky of the Steel Tanks. This means that, all in all, Melmetal is less popular than it once was due to the rise of better options. Still not a bad pick, though it’s been relegated to being a top threat in the Ultra and Master League instead.

Probopass is very similar in utility to Melmetal. Probopass has access to the same Thunderbolt + Rock Slide combo with an Electric-type fast move. However, Probopass loses access to the coveted Thunder Shock in exchange for Spark (2 DPT/4 EPT). It’s very much not all bad, though. Probopass is one of the bulkiest Pokémon in Great League. This has rendered it more or less a strict improvement over Melmetal, given how important it is to be able to tank hits in PvP.

Probopass is a uniquely powerful option because all of its moves can be used, in pretty much any combination. Rock Throw gives you a better winrate when shields are up, vs Spark performing better at breaking shields or getting damage when they’re down. Thunderbolt gives you valuable coverage against Water-types. Magnet Bomb gives you more power against Bastiodon and Probopass itself. Rock Slide has the highest DPE of all 3 moves, making it a great spammy choice for neutral damage.

This Pokémon is not fast. In fact, it's one of the slowest out there. Bringing a fairly low energy gain fast move and two relatively expensive charged moves means you’re not exactly providing much shield pressure. But speed isn’t everything. This slow, plodding monster demands an actual answer (notably a Counter user or mudboi) or else you just won’t get through. It rarely even has to shield neutral hits, and can often even tank Super Effective ones.

To get into numbers, Bastiodon has the 3rd highest possible stat product of all Pokémon in Great League with a maximum of 2670. It’s only lower in this than Chansey and Blissey, neither of which are actually useful. For comparison, Deoxys-Defense only has a stat product of 2230, and Probopass has 2348. This renders Bastiodon absolutely the single tankiest usable mon in Great League.

When it comes down to it, PvP is a challenge about who can outlast who, and it’s not easy to outlast Bastiodon.

While Steelix has more or less fallen out of favor in the freeform Great League meta as a top pick, it still has a very valuable role: beating up on the other three. Steelix’s secondary Ground typing means it double resists both Rock and Electric (as well as resisting Steel, in the case of off-meta sets). This, combined with Crunch for neutral damage and Earthquake for the occasional major nuke, positions Steelix *really* well to handle the other Steel Tanks, both defensively and offensively. While it’s not the most powerful of the four in general, it fills its niche incredibly well. It also manages to deal with the Pokémon that the Steel Tanks are meant to handle, like Skarmory and Altaria, though it definitely doesn’t do that job quite as well, often requiring some shields to make it out on top.

Those All Seem Expensive

Aggron’s a significant downgrade from the other Steel Tanks, sadly. That said, it’s also significantly cheaper, costing only 10,000 dust and 25 candy to purchase it a second move, and of course, it doesn’t even need to reach Level 20 to hit 1500 CP. With newfound access to Smack Down (with the previously used Stone Edge and Heavy Slam), Aggron can certainly masquerade as its more powerful fellows, and with the sheer accessibility of Aron, it could work as a stopgap until you get access to something that’s actually good.

With access to Rock Slide and Body Slam, and pretty solid defenses, Lairon could be a solid budget alternative to the other steel tanks. However, both of its fast moves suck. Metal Claw, its best option, falls below the 3 DPT/3 EPT baseline, having only 2.5 DPT and 3 EPT. It sucks, basically. And consequently, so does Lairon.

So Which Do I Choose?

Primarily, you’re going to be deciding between Probopass and Bastiodon. In the end, it often really is up to personal preference, and you’ll see top players going either way. Probopass certainly has the benefit of being more accessible, with Bastiodon needing to get to level 40 vs Probopass not even needing to reach 30!

Melmetal, as stated above, has more or less been dropped as an option due to Probopass’s sheer tankiness. Which is fine, because it’s both expensive and hard to access if you don’t know someone with a copy of Let’s GO. Steelix is much less powerful as a generalist than the aforementioned Probo and Bast, but it’s still a heavy hitter in limited metagames (e.g. Silph Cups). Aggron and Lairon can be used when you're just getting started, but should be dropped relatively quickly.