They Could've Been Giants: Gen 1 Underperformers 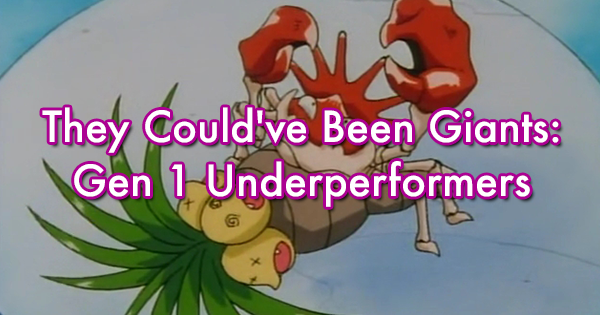 Gen 1 Pokemon are the most iconic and recognizable among Pokemon veterans. After 3 generations into the game, many continue to share the spotlight as excellent offensive or defensive options. This is especially true for trainers lacking in legendary Pokemon or the Rare Candy to power them up.

Some Gen 1 species have the stats to make an impact, but on Niantic’s whim, were never given the right tools. This article highlights 3 such species. Will the upcoming Kanto event finally be their chance to shine? It only takes a few changes to the game master to go from zero to hero.

Main series compatibility: As of Gen 7, Kingler learns Bubble by level up and Surf by TM.

In Vaporeon’s heyday, Kingler had enough Atk to put it to shame. Prior to Gen 3, Kingler had the highest Atk stat of all Water-type Pokemon. Today it ranks at #3, behind Kyogre and Sharpedo. Although its HP is abysmal, Kingler’s bulk is salvaged by a high Def stat. Overall it’s about as bulky as an Espeon, which is okay for a non-legendary attacker.

Kingler suffered from the same problem as Gyarados, which was no access to good Water-type moves. Kingler originally didn’t even have a Water fast move! This was rectified around the time of Gen 2’s debut, with the addition of Bubble to its movepool. Bubble is a fine Water fast move, not significantly better or worse than Water Gun or Waterfall.

That was only half the issue. Although Kingler now has a double Water moveset, Water Pulse puts its DPS below the likes of Milotic, who has much lower Atk. While Niantic blessed Gyarados with Waterfall with Gen 3’s debut, they did not similarly bless Kingler with Surf, bestowing it instead to Pokemon such as Rhydon and Politoed.

In Ninetales and Flareon solos, Kingler would clock in just behind Gyarados as the 3rd fastest counter. It would have to dodge some to beat Solar Beam Ninetales and all Flareon movesets.

In a Rhydon duo, Kingler would do particularly well against Surf movesets. Overall it would fall somewhere between Sceptile and Victreebel in terms of both speed and bulk.

A common, tired suggestion to improve Kingler would be to introduce an exclusive charge move like Crabhammer. The above examples show that Kingler doesn’t need that to become relevant. But Crabhammer would be cool, nonetheless.

Main series compatibility: As of Gen 7, Aerodactyl learns Wing Attack by level up, Sky Attack by move tutor, and Rock Slide by TM.

The story of Aerodactyl in Pokemon GO resembles its circumstances in the main series Pokemon games.

In Gen 1, Aerodactyl couldn’t learn any good moves. It relied on Sky Attack and Hyper Beam for offense. Although they’re great moves in GO, they work differently in the main series games and have significant drawbacks.

In Gen 2, Aerodactyl learned how to make an Earthquake, but it still lacked good Rock and Flying type moves. In Pokemon Gold, Silver, and Crystal, an in-game enemy trainer has an Aerodactyl that illegally knows Rock Slide, a move that it couldn’t learn in this generation.

It took until Gen 3 for Aerodactyl to learn how to move boulders and become a relevant Pokemon, but this sadly isn’t the case in GO. Aerodactyl seems to be forever stuck with an awkward, mismatched moveset. Its unique Rock / Flying typing and workable stats go to waste on a movepool with a single STAB move in Ancient Power. It could’ve been a top Flying type attacker (especially with the recent Sky Attack buff), but as it stands, Aerodactyl is just a trophy.

In a Pinsir solo, Aerodactyl would clock in at around the 6th fastest counter. It would have the 2nd highest Flying DPS in the game, a touch behind Rayquaza. Only about a dozen species can reliably solo Pinsir, which is a testament to Aerodactyl’s hypothetical performance. It would also be a top 10 Machamp counter in terms of win time, but it wouldn’t be a great option due to being about as frail as Jynx.

In a Victreebel duo, Aerodactyl would perform exceptionally against its Poison movesets, almost equaling Rayquaza vs. Acid + Sludge Bomb. Grass movesets would render Aerodactyl about as bulky as Espeon, with Solar Beam posing a particular challenge.

With Rock Slide, Aerodactyl would find itself a touch behind Dragon Tail + Ancient Power Rayquaza against targets doubly weak to Rock. It unfortunately would not be suitable for Charizard or Moltres duos without a partly cloudy weather boost.

We get it: Machamp is the undisputed Fighting-type king. Even with an optimal moveset, there is nothing that Hitmonlee could do that Machamp wouldn’t do better.

That said, Hitmonlee has a lot of room for improvement. He has the 5th highest Atk of all current Fighting-types and slightly better bulk than Breloom and Blaziken. Yet he is outperformed by Poliwrath and Ursaring, one of whom isn’t even a Fighting-type! In GO, the moves make the Pokemon. This is particularly true of Fighting moves: there are a lot of them, and most are kind of bad. Hitmonlee has many of the bad ones.

Though Hitmonlee’s stats and nothing special compared to some Gen 3 pugilists, there was a time when he could’ve been the 2nd best Fighting-type Pokemon. (Such a time did exist, when Fighting types were irrelevant.)

This is understandably not an inspiring moveset, especially since Hitmonlee is supposed to be a kicker, but Counter and Dynamic Punch are too good.

In an Absol duo, Hitmonlee would clock in at around the 5th fastest counter, with speed similar to Breloom and Blaziken, and bulk falling between them against Dark Pulse movesets.

In a Tyranitar duo, Hitmonlee would clock in at between the 4th to 5th fastest counter. His speed and bulk would be about the same as Breloom and Blaziken, depending on moveset. He would be theoretically viable against non Fire Blast movesets; Fire Blast is a near 1-hit KO on Hitmonlee.

Given cloudy weather, Hitmonlee would also become viable in Houndoom (except vs. Fire Blast) and Lapras duos.