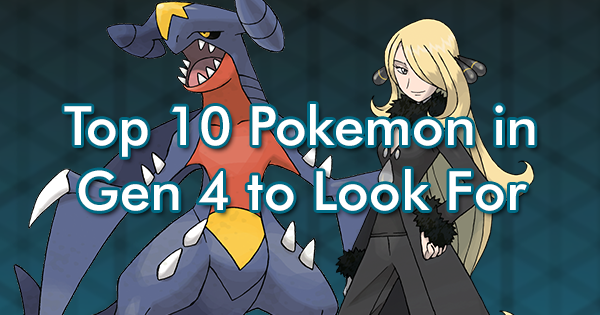 Latios and Latias leave the Tier 5 raid spot on June 5th. Next up is presumably three months of the Regi-trio. We may even see a return of Ho-Oh like we did Lugia after that, but once that all is complete, Gen 4 should be the next release of Pokemon!

Pokemon GO generation releases are events that are always a major milestone. It's a huge attraction for anyone who is familiar with the Pokemon released, and the Diamond and Pearl generation is very well remembered. Having been the first Pokemon game on the insanely successful Nintendo DS, Gen 4 includes many new evolutions for previously released Pokemon and a bunch of new type combinations.

This list is of the ten Pokemon in the next release that will be most relevant to battling and raiding.

Like Slaking, Regigigas has ridiculously high stats. Not only that, it also has access to a variety of charge moves. With its gargantuan stats, there will be some surprising niche for Regigigas. For example, a Rock Smash + Focus Blast Regigigas has higher DPS than Close Combat Machamp, and 50% more TDO than Hariyama, instantly making it a Fighting-type contender.

For all Regigigas has going for it, in the main series games it is held back by the ability “Slow Start.” Slow Start makes it that for the first 5 turns of battle, Regigigas attack and speed stats are halved. How this nerf would be conveyed in GO will have to be seen. Slaking’s nerfing ability “Truant” has been reflected with its “Yawn” attack. While Regigigas doesn’t learn Yawn in the main series games, Pokemon GO could implement something similar. Then again, Regigigas’s stat line is low enough where it my fly under the radar. We’ll have to see what happens come Gen 4!

It has Thunder Shock, it has Wild Charge, and it has higher Attack than Raikou! And it’s a non-Legendary! Electivire will surely be a welcomed addition to the Electric-type family.

Should Niantic conspire against our yellow yeti and not give it Wild Charge, Electivire may fall into obscurity (the fate of all Pokemon who are too similar to others). In that case, we also have Magnezone to look forward too! Wild Charge or not, the Magnemite family sports a total of 12 resistances (the most amount of resistances in the whole franchise!) and Magnezone has the stat line to make use of them. Whatever happens, come Gen 4, we are for sure getting at least 1 exciting new Electric-type! (inb4 Zap Cannon, Flash Cannon, and Hyper Beam hold Magnezone back).

Rhyperior is very strong and bulky. With very balanced base stats and gargantuan CP, it has more bulk than the Legendary Groudon. It also has the potential to receive better Ground and Rock move options such as Drill Run and the yet-to-come Smack Down. As a result, despite its mediocre attack, it will have amazing TDO fitting as both a Ground and a Rock attacker.

Mamoswine will easily be the new best Ice-type of the game if it gets Avalanche and any Ice-type Fast Move. Raikou-tier DPS, ideal E-shaped stats distribution (high Attack and HP, low Defense) and unique typing make Mamoswine excel in many matchups, including Zapdos and Rayquaza should they ever return.

Rampardos has a monstrous 295 base Atk, higher than Rayquaza’s 284 and only 5 points short of Mewtwo’s. It also has a perfect E-shaped stats distribution. Give it any decent Rock-type charge move and it will be DPS king of Rock-types regardless of the fast move. Give it Smack Down and Rock Slide, its DPS could even surpass Rayquaza! The only shortcoming is its bulk, which is comparable to that of Alakazam.

Darkrai will be a massive DPS upgrade to Tyranitar. As long as it gets a double Dark moveset, even with the worst combination of them (Sucker Punch + Dark Pulse), Darkrai will have 13% more DPS than Tyranitar. If Darkrai gets Snarl and Foul Play, its DPS will be monstrous; it will then be the 2nd-highest DPS against Psychic-types, only second to Shadow Claw + Shadow Ball Gengar. Given that Dark-type is one of the most pervasive, neutral hitting types in Pokemon, Darkrai could even rival Dragonite as a generalist, albeit with less bulk.

Yes, we do need to power up another Dragon-type!

Garchomp will be the strongest pseudo-Legendary ever, so strong that it even challenges some of the current Legendary Pokemon. With Dragon Tail and Outrage, it will be a direct upgrade of Dragonite, sporting 30% more bulk than the Legendary Rayquaza; with Mud Shot and Earthquake, against an Electric-type Pokemon with full Electric Attacks, it has about 27% more TDO than the Legendary Groudon. In a neutral setting, Garchomp’s DPS x TDO is king - it ranks higher than even Mewtwo!

The debate on the best Fire-type will finally come to an end - the answer is not Moltres or Entei nor Blast Burn Charizard; but the Volcano Pokemon Heatran. In a nutshell, it has the better of everything: the DPS of Moltres, the TDO of Entei, and the best possible defensively complementary typing for Fire - Steel, which gives Heatran an extra resistance against all Fire-type targets (Grass, Ice, Bug and Steel), further boosting its bulk to a monstrous level. Heatran will definitely be a Fire-type Pokemon you don’t want to miss.

Palkia is like a super Kingdra, the only other Pokemon across all generations with the unique typing Dragon-Water. Water is a great complementary typing for Dragon as it negates Dragon’s weakness to ice while Dragon negates Water’s weakness to Grass and Electric. The great Dragon-Water typing also accords Palkia some special advantages, such as doubly resisting Water and Fire-type attacks.

Aside from a great typing, Palkia can potentially learn Dragon Tail and Outrage and it is only 4 base Attack points short of Rayquaza. Due to the damage rounding, in most cases Palkia will have identical DPS to Rayquaza but noticeably more bulk, hence it can be seen as an upgrade to Rayquaza.

Check back here for a longer list of the Pokemon that didn't make the top ten.

Roserade is likely to claim two titles: Highest DPS Grass and Highest DPS Poison. It will be a formidable Glass Cannon.

Weavile could surpass Tyranitar in DPS as a dark attacker. Also, if Mamoswine doesn’t get Avalanche while Weavile does, it will claim the highest DPS Ice-type.

Like Electivire, Magnezone has access to Thunder Shock and Wild Charge. Magnezone also has the most resistances (a total of 12) in the franchise. It will be a great budget Electric-type.

Tangrowth has very solid stats. If it gets Vine Whip + Grass Knot or Power Whip, it will be a TDO upgrade to Frenzy Plant Venusaur.

Magmortar, with Fire Spin + Overheat, will be an enhanced Flareon. While it does not quite compete with the Legendary Fires, it will surely be a Fire-type contender.

Togekiss will be the bulkiest Fairy-type. It also has to potential to receive the first Fairy-type fast move - Fairy Wind and earn the title “Dragon Slayer”.

Yangema competes with Scizor and Pinsir, sporting marginally better TDO by trading off a little bit of DPS.

Leafeon, with Razor Leaf and Grass Knot, has the DPS of Frenzy Plant Venusaur but higher TDO. It will be a welcomed addition to the Grass-type family, no less.

Glaceon is guaranteed to have Ice moves. Fortunately, its move pool includes Avalanche. If neither Mamoswine or Weavile gets Avalanche but Glaceon does, it’ll best the ice department.

With Tackle + Hyper Beam, Porygon-Z makes a great generalist. It also has access to a great variety of moves, making it viable in some specialized matchups.

Gallade is a Fighting-type that is not weak to Psychic. Unfortunately, it doesn’t quite compete with Counter + Dynamic Punch users despite its stellar stats.

The Altered Forme is just an enhanced Dragon/Ghost version of Lugia but the Origin Forme will be crazily good. We'll have to see how Niantic handles Deoxys's forms before considering Giratina's.

Like Giratina, one form (Land Forme) will be just mediocre but the other (Sky Forme) will make some huge waves. We'll have to see how Niantic handles Deoxys's forms before considering Shaymin's.

Behold, the god of Pokemon, an enhanced Mew.

Behold, the single best attacker of the game - Dialga.

Like any other powerful Dragon, Dialga has access to Dragon Tail and Outrage. What makes it stand out of the crowd is its fabulous Dragon-Steel dual typing, even better than Palkia’s Dragon-Water. The Dragon-Steel typing leaves Dialga with only two weaknesses - Fighting and Ground, but as many as 10 resistances (2 of which are double resistance)! Offensively, only one type resists both Dragon and Steel attacks - Steel. Dialga would be the greatest generalist ever.

As a Steel attacker, its Legendary stats and the potential to get better Steel-type moves will immediately make Dialga the best Steel attacker, something that its counterpart Palkia cannot achieve easily.

To sum up, Dialga has the potential to be best in not one, not two, but three roles: Generalist, Steel-type attacker, and Dragon-type counter.

We don't know when Gen 4 is coming. With events like the Battle Showdown Event and the Earth Day Event, Niantic has shown that content will be available without the release of new Pokemon. Nevertheless, Gen 4 gets people very excited. There will likely be a burst of players joining for the release, battling gyms and raid bosses will have a plethora of new contenders, and trainers will get to catch new Pokemon in a new chapter of our PoGO adventure. There aren't any hints about when we will see Gen 4, but it will be terrific.