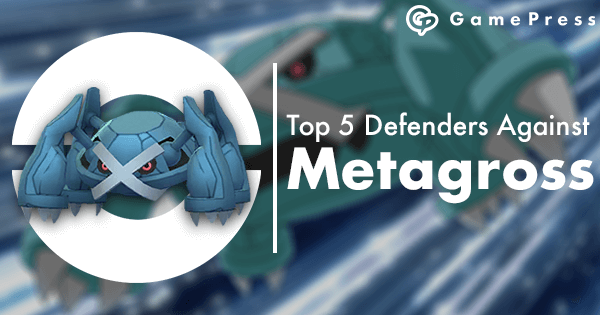 Metagross gaining Meteor Mash was the dawning of a new era of gym offense in Pokemon GO. Topping the charts as the greatest overall attacker in the game, along with resisting every single attack from the greatest gym defender Blissey, there is little reason to use Machamp over this meta mashing monster for your gym pounding needs. As a result, trainers looking to deter would-be-attackers may want to shift their attention away from Fairy-types and focus on Pokemon that excel in slowing down Metagross.

In the article below, we will count down from the 5th best defender against Metagross to el numero uno. The rankings are based on the time it takes Metagross to defeat them as well as their propensity to knock it out. Conveniently enough, the best 5 defenders of these two metrics combined outpace Blissey in ranking, which should be taken as a testimate to Metagross’s Blissey beating power.

If you’re curious about the methodology, Metagross’s time to win was measured against 46 different gym defenders using GoBattleSim. The best 16 of this 46 were then put under the microscope to determine which had the greatest chance to knock out an offending Metagross. These two metrics were then multiplied together to give an idea of their overall usefulness. To assure quality, these numeric results were then reviewed by the GamePress Elite, lead by none other than the illustrious RyanSwag.

Given that Milotic ranked next to Snorlax in our previous Defender Tier List, gained some bulk from the stat rebalance, and resists Steel-type damage, it should come to no surprise that it is one of the greatest defenders against Metagross. One would think that its amazing bulk is the secret to Milotic’s success against Metagross, but it only ranks 8th in battle time among the 46 gym defenders observed for the purpose of this analysis. The true secret is having the powerful Fast Move Waterfall and the hard to dodge Charge Move Surf. This combo allows Miltoic to creep up in lethality, bringing the hurt to Metagross and any Electric-type Pokemon your opponent switches in to take it out. As such, Milotic is not only great at throwing off Metagross but is also excellent at throwing off most attackers in Pokemon GO and is a great addition to your gyms.

Steelix is yet another defender that shouldn’t surprise anyone to be on this list. Like Milotic, Steelix is an extremely bulky defender that is as excellent at harassing Metagross as it is against most attackers. What allows Steelix to pull ahead of Milotic is its access to Crunch and improved low CP range performance. Crunch hurts as much as Surf but launches more often, and Steelix’s naturally low CP means it will keep its motivation in a gym longer than Milotic would.

Another factor working in favor for Steelix as a defender is its synergy with the other defenders on this list. Combining the Electric, Rock, and Dragon-type resistance Steelix has alongside Milotic or the next two featured defenders creates a well-rounded team that can deter many attackers.

Where the previous two defenders only tickled Metagross with their attacks, Charizard brings the pain with the greatest Fire-type Charge Move in all of Pokemon GO, Blast Burn. This two-bar Charge Move exceeds the damage of any other attack present in this analysis and will surely melt any Metagross foolish enough face it. The one downside is that Charizard’s power is limited by its bulk. As a result, more skilled attackers may take out Charizard before succumbing to its flames. Metagross also isn’t a natural pick to take out Charizard either, so while good on paper, it may be limited in practice.

You may be wondering how Charizard made this list but Typhlosion didn’t. Despite having the same exact stats in Pokemon GO, Typhlosion is one step behind Charizard due to its lack of Fire Spin. This slight downgrade in power was enough to knock Typhlosion below the Top 5 for defending against Metagross. If you missed out on Charizard’s Community Day, Typhlosion can work as a budget option should you lack others on this list.

While Gyarados doesn’t handle Electric-type Pokemon very well, it’s a huge burden for just about anything else. Having a resistance to Steel-type damage and the Charge Move Crunch further solidifies Gyarados’s role as a top-notch Metagross defender. If you want to punish anyone bold enough to take on your gym, Hydro Pump is a worthy option to slip in a surprise KO or to at least get them to audibly say “Dang it” to themselves as they proceed to tear down the gym. You should know that this headache + a single Golden Razz could just be enough to tilt someone into calling it quits for the day and leaving your gym alone.

It’s worth noting that Slowbro, Slowking, and Tentacruel are three Pokemon that arguably do a better job at threatening both Metagross and Machamp at the same time. However, all three are pretty awful at doing anything other than wasting Metagross’s time, putting them below the top 5 Pokemon in this specific analysis. Given that Gyarados can give some hurt to Electric-types that may come in to defeat it, you cannot argue how it ranks one notch above the others.

Empoleon is one of two Pokemon currently released in Pokemon GO that specializes in giving Metagross a hard time as it boasts a double resistance to Steel-type damage. The 2nd one, Lanturn, has the bulk and CP range utility to be highly worth considering for this type of strategy, but ultimately lacks the punch to be considered a real threat to Metagross. Empoleon, on the other hand, has plenty of punch, and is the only Pokemon in the 18 Pokemon focus group for this analysis to truly threaten KOing a Metagross consistently.

Being weak to both Fighting and Electric-type damage, Empoleon may be a risky option for more comprehensive defense strategies. You can use Empoleon’s power to either patch up a gym with a glaring Metagross weakness or when coordinating to make a gym comprised of these five highlighted Metagross defenders + Blissey.

Like Empoleon, Magnezone boasts a double resistance to Steel-type damage. Unlike Empoleon, Magnezone isn’t currently available in Pokemon GO. When Magnezone is released it will perform on the level of Gyarados for the purpose of harassing Metagross. Including Steel-type damage, Magnezone has resistances to 11 types in the Pokemon universe, suggesting it may become a central player in future gym defense compositions. It could be worth it to start IV checking and lucky trading your Magnemites and Magnetons now rather than later.

While Metagross isn’t the only attacker in Pokemon GO, it is the greatest and has good odds to appear given its availability on Community Day. For this reason, anyone looking to deter trainers from attacking a gym should be aware of what best defends against it. Milotic, Steelix, and Gyarados should fill that role for most players, but those really looking to rub it into Metagross may want to consider having a Blast Burn Charizard and Empoleon at the ready for the best chance to knock it out. Lanturn, Slowbro, Slowking, and Tentacruel are also great defenders underrated by this specific analysis that you may want to consider for gym defense. Magnezone will also be a superb addition once added to Pokemon GO.

Keep in mind that the goal of gym defense in the current meta isn’t to stop someone in their tracks while they attack a gym, but to deter them from attacking the gym in the first place. Extended battle times, having to switch, and the threat of damage are three factors that may break a would-be-attackers will to fight and are therefore central to any modern, non-aggressive gym defense strategies. When participating with gyms in Pokemon GO, make sure to not take things too seriously and above all else have fun.