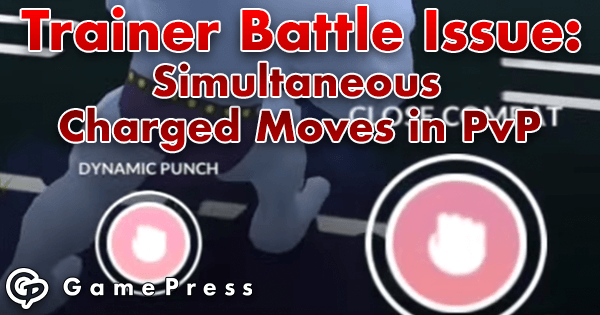 When simultaneous charged moves occur in PvP, the player with Charged Move Priority (CMP) will get to use their move first. CMP is predetermined before a battle begins and remains constant throughout the battle.

In an initial match between two players, the player who clicks USE THIS PARTY last will have Charged Move Priority. This is usually the player who receives the invite, though can be the sender if they wait for the receiver to select their team first.

In a rematch, the player who clicks USE THIS PARTY first gets CMP. Most often this is the loser of the previous battle, as the winner has a delay while the game shows their badge progress.

If you are holding the phones next to each other, you can see the player with CMP will enter the battle about a quarter of a second before the other player.

This pattern holds whether a challenge is made via the friends list or QR code.

In over 300 trials there was one exception to this rule (Blastoise with Hydro Cannon jumped in front of a Suicune with Bubble Beam mid-battle… of course it is Suicune that causes a problem). At the time of publication, this deviation can be neither duplicated nor explained.

The quality of the connection appears to deteriorate during rematches which frequently results in one player getting a move ahead or behind.

One of the biggest mechanical issues in PvP has been the simultaneous firing of charged moves. While players can knock each other out simultaneously with fast moves, there is an in-game priority to decide which charged move happens first. For much of the first month of PvP, this was assumed to be random. Recently, a trainer named boushinshi (known for the world’s first Tyranitar duo) hypothesized a pattern… the player who sends the invite will fire the charged move first.

I set out to validate this, both with my testing partner IVPips (creator of the PokeNav Discord Bot) and with my family’s accounts. Early in testing, it was quickly apparent that there was a pattern. Initially, it appeared to occasionally deviate, but video review showed that all deviations were due to moves that were not actually simultaneous. Most of these were connection issues or user error that allowed one player to get ahead of the other.

The third wave of tests focused on the exact moment CMP was determined. Initially, the tested assumption was based on who sent the invite or rematch first. Upon further review, the time a player hit USE THIS PARTY would determine priority.

The final wave featured two phones side by side, and at that point, it was clear that one player was entering the battle slightly before the other. That was always the player with Charged Move Priority. There is probably a reason for this (such as one phone hosting the battle) that is beyond the scope of this study.

A majority of initial testing was done with Whiscash vs Whiscash (Mud Bomb) or Meganium vs Meganium (Frenzy Plant). Eventually, different combinations of two unique Pokemon and moves were used and the pattern was unchanged.

Rematches do behave slightly different from the initial match. It is much more common for one player or another to get a turn ahead/behind as connection appears to deteriorate, thus complicating the testing process as moves do not fire simultaneously. Though it trended towards the CMP player being the one to gain extra moves/energy, testing was not conclusive and showed moderate deviation from that hypothesis.

Why Does This Matter?

Simultaneous charged moves early in a battle are not much of an issue. If the charged move will not reduce the opposing Pokemon HP’s to 0, both players will get to fire their charge. However, there are two moments in a match where the impact is significant:

Early in PvP, this impact was minimized. Most players were using non-optimized Pokemon, so the winners came down to type advantage and raw power more often than not. However, the narrow metagame that came with Silph Arena’s Boulder League led to many mirror matches. Matches began to frequently be determined by simultaneous charged move tiebreakers.

In the short term, competitive play needs a solution. For example, a coin flip can determine which player gets CMP first in a best of 3 series. In subsequent matches, the loser of the previous game has the option to send or receive for the next match. Given the potential issues with rematches, there may be value in resending a fresh invite each match.

During a mirror match, the player without CMP should consider switching when it normally wouldn’t be optimal. For example, in a Mud Bomb Whiscash mirror match the player without CMP will be forced to use a shield or lose a charged move when their Hit Points get low. To avoid this situation, a switch will break the tempo and reduce the likelihood of a simultaneous move. Switching comes with disadvantages, but it may be somewhat offset by reducing the advantage of CMP. Other strategies (such as bluffing/using a blizzard) can also negate some of the CMP advantage.

Long term, this is a flawed game mechanic. Matches are too short for this not to have a serious impact, and as the meta matures mirror matches will become even more common. In a previous article, I suggested a speed stat to determine which move fires first. Short of that, many other things can be used as a tiebreak… CP, IV, Move, Type Advantage, or a myriad of other options. As an alternative, fast moves can reduce both Pokemon to 0 HP simultaneously. Charged moves could work the same way (though a draw is an admittedly unsatisfying result).

Simultaneous charged moves are defined as moves that happen on the same PVP turn. Both players will have the chance to use a shield and pump their charged move before any other action is taken.

During testing, there were many players where one player got a move “ahead” of another player, likely due to connection issues. When this happens, players are allowed to act once before the second move fires. These trials were not counted as simultaneous charged moves. While this rarely happened in initial matches, it was very common in rematches.

Pokemon species, CP, IV, remaining HP, leftover energy, and the winner of the previous match have all been ruled out as potential factors to determine which Pokemon sends their charge first.

When two different charged moves happen simultaneously, there were no examples that broke the stated pattern besides the earlier mentioned Blastoise/Suicune incident. However, it must be noted that there is an overwhelmingly high number of moves that can fire simultaneously, so this sample is not large enough to rule this out as a factor. At the very least though, it is clear that the time a player hits USE THIS PARTY is a secondary tiebreak at worse.