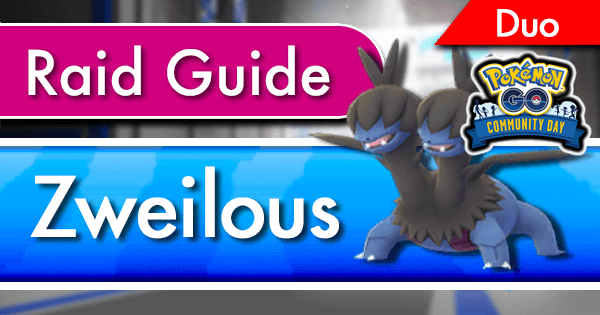 Happy Community Day! Despite being shown as a Tier 4 Raid Boss in-game, Community Day Zweilous raids have a full 15,000 HP, meaning this is actually a Tier 5 raid. That said, its low Defense and double-weakness to Fairy Type moves means it's duoable, and potentially even soloable with the best counters, especially in Cloudy weather.

One of the few times that Mega Latias will out-perform Mega Latios in raids. The power of Charm and Outrage is just enough to make Latias the superior Pokemon among the current Mega Evolutions.

While not as strong as Mega Latias this time around, Mega Latios is still viable due to its high Dragon Type damage.

For larger groups of trainers that lack strong counters, Mega Altaria is arguably the best Mega Evolution to bring around. Its ability to boost Dragon and Fairy Type moves combined with its very high durability makes it an outstanding choice for select groups.

The gold-standard counter without a doubt, Shadow Gardevoir has the DPS needed to potentially solo this raid, especially in Cloudy weather. Just note that Dark Type moves hurt Shadow Gardevoir a bit worse than other Fairy Types due to its Psychic sub-typing.

Another outstanding counter, Shadow Granbull is often overlooked, but hits very hard for a Fairy Type. This is a very safe pick for Zweilous raids.

Another outstanding Fairy Type, the basic Gardevoir should not be underestimated, as it can make this raid very easy. Just remember that Gardevoir doesn't deal with Dark Type moves as well as many other Fairy Types.

Outstandingly bulky, Togekiss resists everything that Zweilous can throw out save Bodyslam, and hits for enough damage to easily manage a 2-trainer run.

The top Dragon Type counter, Shadow Salamance' sheer power and strong moveset gives it a DPS similar to many Fairy Types, but its TDO is substantially lower due to its low defensive stats, Shadow debuff, and Dragon Type weakness.

This is another Pokemon that's easy to overlook, but its high attack and good moveset makes it worth using in this raid.

A solid Fairy Type, Primarina can definitely hold its own in this raid.

Similar to Shadow Salamence, Shadow Dragonite hits hard enough to be worth considering despite Zweilous' double Fairy weakness. It's a bit weaker than Shadow Salamence, but it will also tend to last a little longer.

Zacian - Hero of Many Battles

While we don't have Crowned Zacian yet, Hero of many Battles is still a great option despite not having a Fairy Type Fast Move due to its high base Attack.

Another solid Fairy Type that can keep up its damage despite its lack of a Super Effective Fast Move.

One of the easiest to access Fairy Type counters in the game, Sylveon is a staple in this fight for its high general performance.

Strange how a double-weakness to odd types can bring out strange counters. Beartic is a decent Ice Type, but also a decent counter for this raid due to its Super Effective moveset.

Very frail, yet also very strong. Shadow Alakazam hits for DPS near the top of this list, but it's too glassy to be a top counter for this raid.

The same basic case as Shadow Alakazam, but objectively worse.