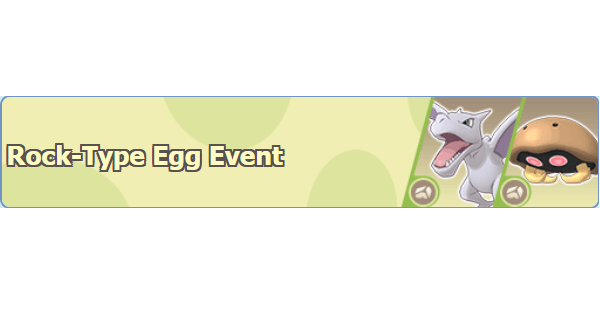 The Rock-Type Training/Egg Event is here, with plenty of new Sync Pairs, two new shinies in Kabutops and Aerodactyl, a unique double scout banner, and plenty of free level up manuals to go round! Of the new eggs, unfortunately only a few approach anything one could call "viable", but those which do are actually fairly interesting so I'll give you a quick look at them here:

Kabutops (Tech) Is a rather capable defensive tank with the incredibly rare and powerful ability to apply Sandstorm to the field. While Kabutops of course isn't quite as effective in this role as the Mp Refreshing, Flinch spamming Acerola & Pallosand, it's still more than viable for players who can't devote the Sync Orbs to the latter or have already used up its Sandstorm Mp in the Battle Villa.

Aerodactyl (Support)'s access to Shifty Striker (ironically) makes it a rather useful tank with a great one bar move to spam, decent defense buffs, and two other useful Passives in First Aid 2 and Revenge Boost 1. It seems designed to fit a similar role to that of the great Professor Oak & Mew for players who missed out on that event, and does a perfectly satisfactory job of this (even if it doesn't come close to the real thing).

Aerodactyl (Strike) is one of the few Egg Strikers to carve out something approximating a real meta niche. For this pair, it's as a totally self sufficient Rock Striker along the lines of Olivia & Lycanroc. Although it again fails to live up to the genuine article, it makes for a surprisingly good substitute on the team of a player without access to the former pair or who prefer to use Shinies whenever possible.

Finally, Onix (Tech) is an interesting enough backup tank, particularly in Legendary Arena, thanks mostly to its access to Screech allowing it to greatly augment the power of its physically offensive teammates and the power of Regenerative healing combined with the one bar Rock Throw.

Scout the Sync Pairs Kukui & Lycanroc and Oliva & Lycanroc (Midnight Form) at a higher rate for a limited time!

Attack Up
Crit Chance Up
Accuracy Up
Sp. Def Down
Speed Up

Click on one of the Stage names below to get information on the enemies you'll be facing and the drop rates! you can expect from them!