Guaranteed Lucky Cookie 2: The Best Use of Status Immunity 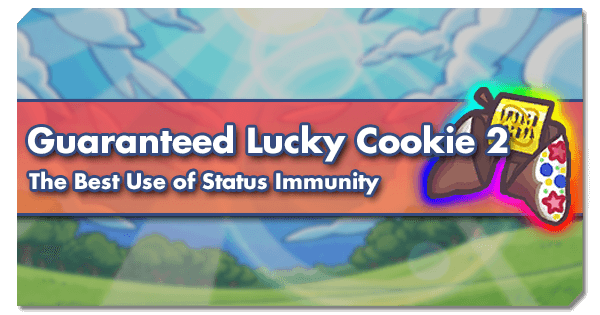 We’re now staring eye-to-eye with the second Legendary Gauntlet, arguably Pokemon Masters’ most difficult game mode to master. And much like the first, we’ve got another Guaranteed Lucky Cookie, but this time it’s Lucky Cookie 2. So what does this cookie bring to the table? None other than Status Immunity. And like the last run of this event, we’re going to review this new Guaranteed Lucky Skill in order to figure out its advantages, disadvantages, and what Sync Pairs can generally make the best use of it.

Status Immunity is one of the most self-explanatory skills in all of the game; it prevents status. Burn, Poison, Paralysis, and Sleep are all denied when a Sync Pair sports this skill, making it a useful feature for many tanks. An easily overlooked feature of this skill is the fact that if you put it on your designated tank, it outright invalidates those annoying Go Viral 9 stages, as if the main target of a status move is immune to the status that it’s trying to inflict, then it can’t spread to the rest of the team. Given the fact that we currently don’t have many really effective Sync Pairs capable of removing status at the time being, Status Immunity can also bring some nice role-compression to the field, expanding the tanking capabilities of any Sync Pair that wields it.

The problem with Status Immunity is the same as basically any other Lucky Skill; the opportunity cost. That is to say, picking this skill means that you can’t have any of the others. This is fine for most skills, but a lot of tanks really want a specific skill to complete their strategy, usually Vigilance, so it can be hard to justify switching to Status Immunity in some cases.

As a designated Physical Tank, it’s hard to beat Dawn & Torterra. While they may not be quite as tanky as some other Sync pairs that we’ll soon deal with, their whole kit takes a multi-pronged approach to tanking thanks to their high bulk, Attack drops when hit, Defense boosts, healing and passive recovery, and their built-in Vigilance, which opens up their Lucky Skill slot more than many other tanks. The one down-side to going this way is that it will deny them a fair bit of power if you want to go for a DPS build, though we have a number of alternatives for that role now.

If you’re looking for pure physical bulk, then few Sync Pairs can perform quite as well as Jasmine & Steelix. In terms of just surviving a powerful Physical hit, these two are nearly unrivaled when Mega Evolved and setup, and their huge defense that can easily be boosted even farther and protected via their Jasmine's trainer skill, which acts like a temporary team-wide Vigilance. They have many of the resources that they need to tank like champions, but Poison or Burn in particular can cut down their bulk by a significant amount. This is why Status Immunity is a great choice for them, though it’s not the absolute best pick, as several other Lucky Skills are very worth the slot.

Another tank that can afford to get creative with Lucky Skills, Lana & Araquanid can pick up and use Status Immunity with very little opportunity cost due to the ease of just picking up Vigilance on their grid. They’re not the bulkiest of tanks in the game, but they are doubtlessly effective, and have the potential to help their team out by denying status before it can become a liability.

Another Sync Pair with access to Vigilance via their grid, Jasmine & Celesteela are great at tanking Special attacks in particular, so the ability to shrug off Status can be very important. However, not every build picks up Vigilance, so they won’t always have room to go for Status Immunity.

Sygna Suit Leaf & Venusaur are bulky… like, really bulky! Post-Mega they have one of the highest average bulk ratings in the entire game, and they back this up with Potion and passive Regeneration effects for added longevity. Because they don’t boost team Defense and/or Special Defense, Vigilance is also a bit less important on them than many other tanks, so taking another Lucky Skill is fine. The ability to ignore Poison and Burn in particular can add a lot to their longevity, so why not pick up this skill to make them even better tanks?

Well, for one, other Lucky Skills will tend to have stronger average performance. Going for a Defense/Special Defense boosting Lucky Skill will grant a %-based boost to this Sync Pair’s already titanic bulk, so these can be very valuable. And while a bit less important here than on many other Tanks, the power of Vigilance has the advantage of being potentially useful on literally any stage in the game. And to top all of this off, Sygna Suit Leaf & Venusaur are also great options offensively, so picking up a more defensive Lucky Skill pigeon-holes them a bit, and locks out quite a bit of their potential power. These factors make Status Immunity viable, yet not exactly the absolute stand-out choice.

This one is a bit of an oddity. Piers & Obstagoon don’t rely on stat-boosts or recovery for their tanking prowess, rather they outright negate enemy attacks with Obstruct and setup their Endurance effect to survive attacks. These options are great, but status moves like Toxic or Will-o-Wisp outright ignore both, leaving them particularly vulnerable to status.

Defensively speaking, Caitlin & Sableye have a lot going for them. They can potentially max the entire team’s Defense and Special Defense, they can set barriers for the entire team, and they even have the coveted Vigilance to ensure that their defensive powers don’t go to waste. So Status Immunity is a natural pick, right? Well…

Phoebe & Dusknoir aren’t exactly the bulkiest of tanks in the game, but they do have Vigilance in their base-kit, meaning their Lucky Skill slot is more open than most. However, they also will tend to want to go in another direction depending on their build, making Status Immunity a bit of a shaky pick overall. Still, they definitely have potential for being a solid pick on stages that focus heavily on Status when sporting this Lucky Skill.

All-in-all, Status Immunity is a useful, though not super useful Lucy Skill. While a few Sync Pairs can appreciate it, it’s basically never the optimal choice for general gameplay. For this reason, it might be a good idea to hold onto a cookie or two for the future. Who knows? We might just end up with a tank that has every defensive base covered except for Status at some point, or we might be graced with a new game mode that has a heavy focus on status in general.