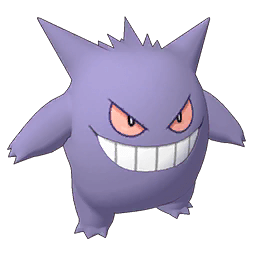 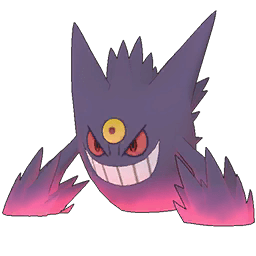 You can hear tales told all over the world about how Gengar will pay a visit to children who are naughty.

Paralysis
Sleep
Speed Up: Self
Recoil
Sp. Def Down: An opponent
Sleep Immunity

Agatha & Gengar are one of the strongest Tech Sync Pairs in Pokémon Masters. Gengar comes with very high Speed and Special Attack stats via its Mega Evolution, while also being able to utilize the very high base Power of Shadow Ball to deal devastating damage. In terms of utility, Gengar has access to Paralysis, Sleep, and Sp. Def reduction, allowing it to tie down enemies and deal even greater damage.

Gengar’s strength is on par with amazing Striker Sync Pairs; it has more Special Attack and a higher base Power move than Mega Houndoom, allowing it to potentially deal more damage. Especially when considering that Shadow Ball has a chance to reduce the target's Sp.Def and open them up to additional damage, it’s easy to see how much of a punch Gengar packs.

When further comparing Gengar to other Mega Evolutions, one will realize that Gengar also deals double damage via Hex and even Tried-And-True Hex doing increased damage when the target is fast asleep. This enables Gengar to deal good damage even pre-Mega Evolution with some luck when using Hypnosis to put enemies to sleep.

A special, conditional element of Gengar’s kit is the Passive Wide Awake, which prevents Gengar from falling asleep. During a specific encounter which might use Sleep a lot as a battle mechanic, Gengar would be extremely useful. Definitely a niche Passive, but potentially a very strong one.

Just like any other Mega Evolution, the full brunt of Mega Gengar’s devastating offense is delayed until we can use the very first Sync Move. As mentioned above, this weakness is less pronounced in Gengar’s case compared to some of its fellow Megas.

While it is true that Mega Gengar has the potential to do more damage than Karen & Houndoom, we can’t look past the issue of lacking offensive buffs. Gengar doesn’t have access to Sp.Atk buffs or Dire Hit, which means it will depend on buffs from allies to get closer to the in-practice damage output of Strikers. Lacking self-buffs as a Special damage dealing Sync Pair also makes it harder to reach the coveted +6 Sp.Atk /+3 Dire Hit combination.

Mega Gengar has both a powerful moveset and the stats to do devastating damage, but it lacks proper buffs; teaming up with Sp.Atk All or Dire Hit All supports will be very handy for Mega Gengar, allowing him to properly terrorize its foes.

Lick
Has a moderate chance of leaving the target paralyzed.
Hypnosis
Puts the target to sleep.
Run Along Now!
Radically raises the user’s Speed. The user takes damage based on its maximum HP.
Hide Info
Shadow Ball
Has a small chance of lowering the target’s Sp. Def.

Become Mega Gengar until the end of the battle. This move’s power increases if the opponent is asleep.