Ponyta is a niche Pokémon with the unique Passive Skill, “Hostile Environment 1”, which raises the chance of inflicting status conditions with the additional effects of Moves. Ponyta will make it easier for you to land certain status conditions. In an encounter where the primary goal is to wear down the enemy, it would be rather efficient, although this may not always be the fastest method of dealing with encounters. They are a very situational Sync Pair. 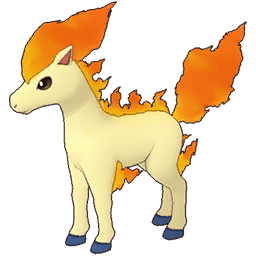 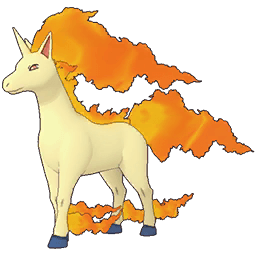 Ponyta is very weak at birth. It can barely stand up. This Pokémon becomes stronger by stumbling and falling to keep up with its parent.

Burn
Unfreeze
Bind
Attack Up: Self
Random Up: Self
Sunny
Stat Condition Rate Up

Blaine and Ponyta are an interesting Sync Pair because they have lots of potential, but not with the current roster being what it is.

Otherwise, he needs some Team Support Boost his Offensive stats so Speed doesn’t end up doing all the work.

Ponyta is one of the fastest Pokemon in the game and can unfreeze himself with Flame Wheel. On top of this, his “Raging Inferno” Boosts Attack and one of the other non-Health stats.

Ponyta can deal both Physical and Special Attacks, giving him a higher probability of advantage over Enemies.

While having Physical and Special Attacks increases Ponyta’s viability, he still has a few limiting disadvantages.

His Offensive stats are quite low, meaning he has to really rely on Speed to get those weaker Moves out more frequently than the Enemy.

The lack of Pokemon who benefit from Sunny Day also makes this Move dead weight in most circumstances.

Lastly, Fire Spin is a very valuable Move since it can trap and prevent Enemies from switching a Pokemon out, but Co-op is the only place where that would be possible.

While there aren’t many Pokemon that would benefit from Sunny Weather yet, Weather effects can give the Team a huge advantage over their Opponents.

Gardenia & Roserade is a good match because they speed up Move Gauge Recovery during Sunny Days.