Brawly & Makuhita are an awesome Fighting Type Sync Pair. They can lower the Enemies’ Defenses while Attacking, which leads to increased Damage over time. However, they just aren’t on par with Machamp or Lucario. They are deeply focused on Offense, but they need a better Move set. 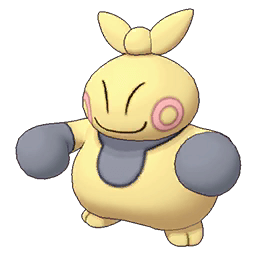 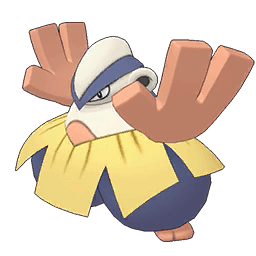 It practices its slaps by repeatedly slapping tree trunks. It has been known to slap an Exeggutor and get flung away.

Defense Down: An opponent
HP Up: An ally
Remove Def Buffs
Attack Up: Self
Defense Up: Self
Sp. Def Up: Self
Low HP Power Up

Brawly & Makuhita are an awesome Fighting Type Sync Pair. They can lower the Enemies’ Defenses while Attacking, which leads to increased Damage over time. However, they just aren’t on par with Machamp or Lucario. They are deeply focused on Offense, but they need a better Move set.

Bringing Them Down to His Level

Makuhita supports its teammates’ damage output by dealing defensive debuffs to the foe. While the damage benefits may not immediately be as obvious as an X Attack All, the defensive debuffs are not negated by the opponent’s Sync Move, meaning that in stages where the targets are not protected from Defense debuffs, Rock Smash is a really handy tool to quickly weaken the foe.

Brawly is one of the few Sync Pairs to carry a Potion on them, meaning that it is quite useful to help restore damage in long drawn out battles. Teammates like Hilda, which suffers heavily from recoil, appreciates Brawly helping to heal her Pokemon and allow her to keep up the offensive pressure.

Beyond Health, all of Makuhita’s stats are quite weak, which doesn’t help the Power of his Moves, which are also on the weak side for their cost.

Makuhita's Brick Break, while being useful as a field effect nullifier, is not a field effect itself, meaning that players will have to use it again to remove the unwanted damage reduction filter. This is unlike Marley’s Status Protection field effect, which allows players to set it up, then switch into a Strike Sync Pair that can deal more damage. This need to switch Brawly in can be cumbersome in making sure a set up works smoothly.

He’s definitely not the first pick among Fighting Types, but Makuhita can assist his Team through Heals and helping to reduce Enemy Defense with Rock Smash. Since his Defense stats and Speed are so low, it’s good to have a Defense and Sp. DEF Buffing Support on the Team too.

Makuhita’s low Bulk may prevent him from being targeted for most of the Battle, but that won’t protect him from AoE or Sync Move splash Damage.

Potion
Restores a bit of an ally’s HP.
Hide Info
Brick Break
Removes physical and special damage-reducing effects from the opponents’ field of play.
A Rain of Fists!
Sharply raises the user’s Attack. Raises the user’s Defense and Sp. Def.