Sceptile's awesome speed and power have kept it relevant ever since the game's release as one of the most versatile offensive pairs available. Incredibly efficient self buffs on top of the excellent dps it maintains throughout an entire match (even ramping that number up through Ramming Speed) are really all anyone could want from a non-mega striker, and Sceptile delivers these in spades. The pair's only real downside is its reliance on the Dauntless Lucky Skill to prevent Leaf Storm's Sp.Atk drop, without which it remains a powerhouse damage dealer but loses the self sufficiency that makes it such a flexible pair. 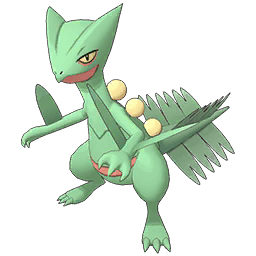 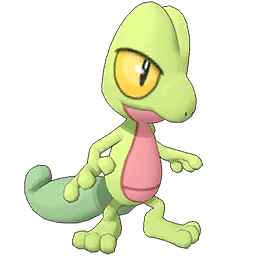 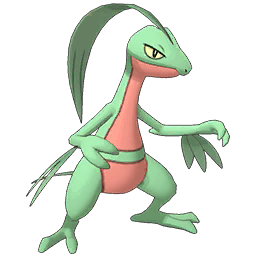 The leaves growing on Sceptile’s body are very sharp edged. This Pokémon is very agile—it leaps all over the branches of trees and jumps on its foe from above or behind.

Their unique move "No Turning Back!" allows them to immediately increase their offensive capabilities and dish out tons of powerful attacks. When speed is all a Trainer is looking for, they stand out as the favored choice in Pokemon Masters.

Having evolved from the already pretty powerful Treecko, Sceptile has marginally better offensive stats and a stronger Sync Move to edge out wins just that bit better.

"No Turning Back!" raises both offensive stats by +2 for each Move Gauge slot it consumes, up to 3 total. This means the Move Gauge should ideally be filled to at least 3 bars before using this move (note that the buff cap on this move is +6, and it can't consume more than 3 bars).

This move is especially great for Sceptile since he has both Special and Physical Strike Moves, which he can use to adapt to the enemy's weaker defensive stat. This is evident in how Sceptile can easily straddle both EX Brock and EX Barry, with the former's Onix more vulnerable to Leaf Storm while the latter is more susceptible to Bullet Seed. In EX Brock, players can make use of this to reduce the reliance on Kris and/or Hilbert, since they can fall back on Bullet Seed to clean up the remaining Lunatone, which are weaker on their Physical Defense.

On the Special Spectrum, Leaf Storm suffers from the problem of imperfect accuracy (90%). When compared to the notoriously unreliable Mega Kick, Leaf Storm's accuracy problem may be ignored, but it is still able to cause problems in runs. This, however, isn't a problem with Brendan & Sceptile, per se, but more of a flaw with the move itself.

Fortunately, players can easily rectify it with allies that provide Accuracy buffs or the ability to never miss, such as Sygna Suit Elesa & Rotom and Thorton & Bronzong, or make use of well-timed Gauge refills to make up for the loss in Move Gauge.

The full benefits of No Turning Back! can only be reaped by using 3 Move Gauge Slots, which means that in the mid to late game where most players have already exhausted their Move Gauge, they might find it hard to buff Sceptile properly.

Players can choose to rectify this weakness by supporting Brendan with Move Gauge refillers like Phoebe, Drake, and Rosa. Players could also tap on Sceptile's Lithe and Haste Passive Skills to buff its Speed and reduce the time needed to charge the Move Gauge slots. Allies that can help in that regard include Roxanne, Marley, Hilbert, and Skyla.

This is aggravated by the fact that Leaf Storm lowers Sceptile's Special Attack by 2 stages per use. This can pose problems in the foreseeable future where 3 Leaf Storms aren't enough to secure the KO on the boss (in the expected increase in difficulty stages). Fortunately for Sceptile, the introduction of Lucky Skills with the Battle Villa update gave it access to Dauntless, a Lucky Skill gives Sceptile an immunity to Special Attack drops. This immunity most importantly nullifies the Special Attack drop from Leaf Storm, which keeps it firing on all cylinders throughout the match.

In single player, Brendan & Sceptile's best partner comes in the form of the newer additions to the game: Sygna Suit Elesa & Rotom. When supported by Dauntless, the model's Breathtaking! fixes the imperfect accuracy of Leaf Storm, as well as reduce the number of moves needed for Sceptile to use its next Sync Move. Other fantastic support options include Roxanne, Phoebe, Rosa, and Skyla. These Sync Pairs mainly support Sceptile through either buffing its Speed or providing instant Move Gauge refills. For players who have yet to match Dauntless to Sceptile, Roxanne and Rosa become rather important to maximize the number of turns that Leaf Storm can strike for full damage.

Mega Strike Sync Pairs like Blue and Karen tend to suffer from low early game damage until after they Mega Evolve through Sync, which takes quite some time to activate. Having Brendan pave the way in the early game can allow players to retain the damage output, with these Mega Strike units coming in on the turn it Syncs to minimize the time they have to spend on the field in their regular form. Steven Stone is a decent shout here due to Mega Metagross being able to come in and Bullet Punch regardless of the current drainage on the player's Move Gauge.

Recoil Strike Sync Pairs, like Hilda, on the other hand, greatly appreciate Brendan cleaning up the field and weakening the boss, thereby reducing the amount of recoil they take from attacking the foe.

Bullet Seed
Attacks the target two to five times in a row.
Dire Hit +
Sharply raises the user’s critical-hit rate.
Leaf Storm
Sharply lowers the user’s Sp. Atk.
No Turning Back!
Uses a maximum of three slots of the user’s move gauge. Based on the amount used, this move raises both the user’s Attack and Sp. Atk by up to six stat ranks.
Hide Info

Prevents the Pokémon from getting paralyzed.