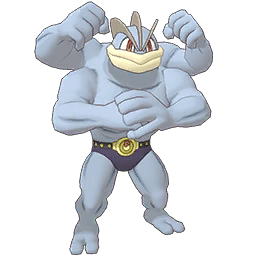 It grasps its opponents with its four arms and twists them up in an intricate hold. People call it “the Machamp special.”

Crit Chance Up: Self
Attack Up: Self
Sp. Def Up: Self
Critical Hit Power Up

Despite having a bit of a glass chin, Machamp can deal massive amounts of Damage that quickly ramps up with every hit he lands.

While his Sync Move lacks any additional effects, it is still none-the-less incredibly powerful with the potential to be even more deadly if both charges of Dire Hit have been used prior.

Getting the Ball Rolling

He can increase his Sp. DEF with “Hoo Hah!”, but that doesn’t change the fact that his overall Bulk isn’t very high. This coupled with low Speed means he won’t last long after the Support is taken out.

He can do exceptionally well on Critical Teams, but it’s preferable that there are also Team Buffers to increase his Speed and Evasiveness.