Caitlin & Reuniclus are one of the strongest Psychic-Type strike pairs in the game, boasting an extremely high Sp. ATK stat at maximum potential. In addition, the pair has access to Psychic, a powerful attack that not only deals significant damage but also has a small chance of lowering the target’s Sp. Def and several buffs, including Move Gauge Boost and Don’t Bore Me! (Sharply raises the user’s SP. Atk. Raises the user’s Defense and Sp. Def.) That being said however, the duo ultimately suffers from a low HP and Speed stat, which ultimately limit survivability and damage output. In a meta that favors high-paced game play and with access to units that outshine Caitlin & Reuniclus on this front, we conclude that while she is undoubtedly a heavy hitter for Psychic favored encounters, she lacks the stats to bump her to the top. 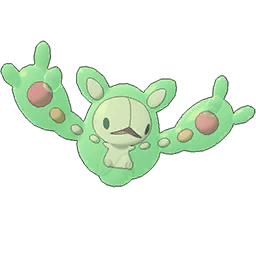 They use psychic power to control their arms, which are made of a special liquid. They can crush boulders psychically.

While Reuniclus is one of the most powerful Psychic type strikers in the game, it pales in comparison to most of the other five star strikers, keeping it out of the upper echelon. That said, it can still be an incredible striker given proper support. Additionally, it fulfills the rather unique niche of bulky psychic striker quite well. Overall, it’s a worthy investment if you’re in need of a psychic type attacker but you may be better served overall by a more powerful five star striker like Houndoom or Lycanroc.

While it doesn’t quite reach Support Pair levels of bulk, Reuniclus eclipses most other strikers in terms of sheer survivability, allowing it to stay in much longer in co-op without switching and losing its stat boosts. This also means that players can switch it in on  opposing sync moves and start setting up while keeping most of its health intact, which is something that frailer strikers usually can’t afford to do. Its unique move, Don’t Bore Me!, even allows it to supplement its high base stats in this area while simultaneously boosting its all-important Special Attack.

Reuniclus has the ability to replenish its move gauge by three through its support move, which more than makes up for its poor base speed and allows it to reach impressive levels of dps when supported properly. Furthermore, instantly regenerating the move gauge is an ability usually only given to Supports and having it on a Striker allows the player to use Supports who lack it. This also increases its aforementioned ability to stay in during co-op games even more by removing the need to switch to a Support when its gauge runs low.

While Reuniclus’ strong three bar attacking move and solid unique moves serve it well as an-above average striker, in comparison to other five star strikers who can max their own Critical Chance like Houndoom or max out their Attacking Stats like Emboar or Sceptile, Reuniclus fails to get the extra push in damage it needs to really shine. It’s lack of a really powerful self buff also makes it particularly vulnerable to opposing sync moves since after it loses its stat boosts it has a hard time getting them back.

Reuniclus greatly appreciates support from pairs with access to Dire Hit All and other moves that raise the whole team’s Critical Hit Rate like Dusclops or Torchic. These will increase the amount of damage it is capable of dealing the most. Outside of that, pairs who can raise Speed like Oshawott or Sp.Attack like Glalie and Nosepass will greatly aid in patching up Reuniclus’ weaknesses.

Prevents the Pokémon from becoming trapped.

Which Are Top Popular Tourist Places OF Nepal? Share Your Experiences!
@travels2nepal01 wrote: I am arranging a family trip to…
Personal Ranking of New Sync Pairs [in-progress]
@Sabaku wrote: Just wanted to give my personal opinion on…
Guzmeria, and a dream
@Libra_Elementia wrote: So, new banner came out. And with…
Code triner
@renatopc wrote: Code me 3395 6543 7484 …
Battle Villa & Legendary Pairs Trend?
@Someone_Person wrote: I noticed this while going through…
Read More