Elesa & Zebstrika's performance is great for encounters that require an Electric-type Physical Striker. However, she suffers from her primary damage-dealing move having Recoil, and does not have as many HP recovery options as other Recoil damage dealers such as Hilda. Her HP recovery move is also tied to a Sure Critical buff, which ends up being an opportunity cost decision the player will have to make. As a result she can be more of a liability and can fall prematurely if the player does not plan out for her Recoil damage carefully, and is targeted by enemies or hit by an AoE move. 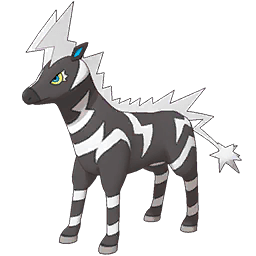 When this ill-tempered Pokémon runs wild, it shoots lightning from its mane in all directions.

Paralysis
Attack Up: Self
Recoil
Next 100% Critical Hit
HP Up: Self
Speed Up
Paralysis Immunity

Spark
Has a moderate chance of leaving the target paralyzed.

X Attack
Sharply raises the user’s Attack.
Wild Charge
The user also takes 20% of the damage it dealt to the target.
Electrifying!
Restores a bit of the user’s HP. Ensures that the user’s next attack will be a critical hit.

Prevents the Pokémon from getting paralyzed.