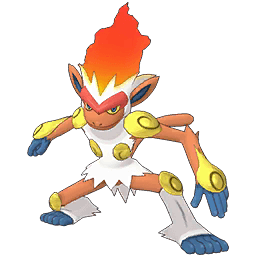 Its crown of fire is indicative of its fiery nature. It is beaten by none in terms of quickness.

Burn
Crit Chance Up: Self
Attack Up: Self
Sp. Atk Up: Self
Low HP Power Up

For the course of this analysis, Infernape is going to be discussed as a co-op pair only since it is entirely outclassed in single player by other pairs that are just as easily obtained through story progression (e.g Lucario and Raichu). In co-op, while its neutral Damage potential still pales in comparison to 5 star exclusive Strikers like Lycanroc and Treecko, its fairly unique Typing among Strikers and the ease with which it can be obtained make it a solid choice for newer Players who don’t have access to better options or who are in need of a strong Fire Type.

Infernape’s high base Power Moves, Offensive Moves, and easy-to-use Boosting Moves allow it to quickly put itself in a position to deal Damage without much assistance from its Teammates. “We’re On Fire!” offers a quick, if not particularly potent, Boost to Damage and if combined with a “Dire Hit All” (either version) wielding Support, Infernape’s own “Dire Hit” can take it to a one hundred percent Critical Hit  Rate.

Infernape is currently the only Fire Type Striker in the game. While it may face competition from Sync Pairs like Mega Charizard X in the future, the fact that it can be easily obtained through the main story and is still a solid Striker will likely keep it relevant for a long time to come.

While Infernape is capable of dealing serviceable Damage, both by itself and with Support, its comparatively low offensive stats and mediocre Boosting Moves stop it from ever reaching the high levels of damage attainable by Sync Pairs like Lucario and Raichu (both of which are also Story Pairs).

Fire Blast’s poor Accuracy in comparison to the three bar Moves of other Strikers makes Infernape slightly less consistent than many of its contemporaries and can lead to some unlucky fumbles in more difficult stages.

Infernape is definitely best used with Sync Pairs like Meganium and Dusclops who can use their Critical Hit Rate Buffs to supplement Infernape’s “Dire Hit” and quickly bring its Crit Chance to one hundred percent. Past that, any Support who can Boost Infernape’s Special Attack or Accuracy will be greatly appreciated.

Fire Punch
Has a very small chance of leaving the target burned. 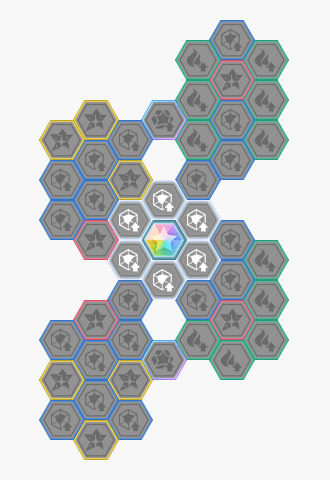