Mewtwo has, perhaps more than any other sync pair in the game, been objectively annihilated by the passage of time, losing nearly all of its old niches with only the introduction of Psychic Terrain on a pair that totally outclasses it as consolation. Although its stats are excellent and a dual typing can, in some highly niche situations, be more practical than just properly planning out your team, these two things are literally all the pair has going for it. Inefficent self buffs relative to other Strikers, moves with relatively low base power, and worst of all, a complete lack of useful Passives or a Sync Grid to provide it the percentage damage boosts it so desperately needs in order to keep up have left its actual damage potential mediocre at best, and it provides no utility outside of pure dps whatsoever.  Need Ghost type damage? Use Morty or Fantina. Need Psychic type damage? Ironically enough, the pair who's Psychic terrain could have made Mewtwo viable again (Musharna) totally outclasses it in terms of damage, so just use it instead. Need literally anything else? Mewtwo is useless to you as those two niches were all it had going for it. All that's left for it to do now is occasionally play second fiddle to Musharna on dual strike comps, or, hilariously, be a worse Drifblim. 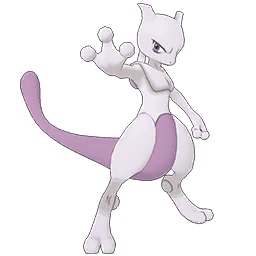 Mewtwo is a Pokémon that was created by genetic manipulation. However, even though the scientific power of humans created this Pokémon’s body, they failed to endow Mewtwo with a compassionate heart.

Confusion
Sp. Def Down: An opponent
Evasion Up: Self
Crit Chance Up: Self
Low HP Power Up