A pair that had a great amount of potential, but that can only be called mediocre at best. The two main things that weigh it down are a lack of a permanent Crit Buff, and the major weakness that its main gimmick (counterattacking with Beak Blast) will almost never work in Single Player, and even if it does will very quickly lead to the loss your Team's only Striker. Even if the Stage you're using it on is weak to Flying, you're better off with literally any other Flying Type, or even any more competent Striker, even if it doesn't deal Supereffective Damage. 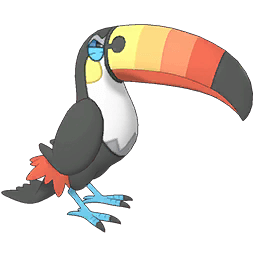 They smack beaks with others of their kind to communicate. The strength and number of hits tell each other how they feel.

Attack Up: Self
Counter
Burn
Endure
Next 100% Critical Hit
Always Sure Hit

X Attack
Sharply raises the user’s Attack.
Beak Blast
The user takes up a counterattacking posture. Using this move again will cause the user to attack, then leave this posture. No other actions can be taken while in this posture. The user will attack if hit by an attack move while it is in this counterattacking posture, then the user leaves this posture. If the move was a physical attack move, leaves the opponent that used it burned.
Second Wind!
Ensures that the user’s next attack will be a critical hit. Makes the user able to endure the next hit it takes.