Karen & Mega Houndoom are placed in this tier for the immense firepower they bring to the team. They currently have among the highest, if not the highest damage cap in the game. Their ability to potentially maximize their own Sp. Atk without external help, combined with Critical Rate boosts and extremely high raw stats make them one of the best Stikers in the current roster. AoE damage and the ability to cause Flinch or lower all opponents’ Sp. Atk (indirectly allowing them to bolster the defense of the team) is just icing on the cake. Furthermore, their Sp. Atk self buff scales with damage sustained, which makes it a good option for reapplying buffs quickly after an opponent's Sync Move. With additional assistance like further Critical Rate boosts and Move Gauge boosts, they become even more potent. 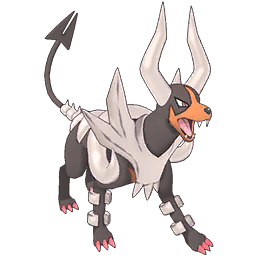 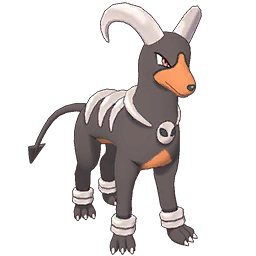 Sp. Atk Down: All opponents
Crit Chance Up: Self
Flinch
Sp. Atk Up: Self
AoE Damage
Burn Immunity
Sleep Immunity

Karen & Houndoom are a hyper-offensive Striker Sync Pair who could also be considered to be a pseudo-Tech Sync Pair. The duo come with multiple mechanics to shake up your foes, whether you immobilize them or straight up knock them out on the spot. On top of Houndoom’s absurd damage output, it can Flinch the enemy and even reduce their Sp.Atk, greatly easing your team’s path to victory.

Houndoom has one of the highest Sp.Atk stats in the game, with very good Speed on top of it. Upon transforming, Mega Houndoom amplifies these stats to an even higher level, leaving most competitors in the dust with its blazing Speed and terrific Sp.Atk.

Build-Up Phase Not an Issue

One of the best things about this Sync Pair is the strong Build-Up Phase that Karen & Houndoom have, which is the period between the encounter beginning and Mega Evolution occurring. Karen has the Trainer Moves Dire Hit, which raises Houndoom’s Crit Rate by +1, and “Entertain Me!”, which raises Houndoom’s Sp.Atk by +3 and a further +1 for each 20% health it’s missing. With the right support, it’s possible for Houndoom to reach +6 Sp.Atk and +3 Dire Hit for maximum Special damage and 100% Critical Hit Chance.

Not Quite Dedicated to Being A Striker

Karen & Houndoom have an amazing kit for dishing out a lot of damage, but Blue & Pidgeot showed us that it is possible to dish out even more damage, and even a fully promoted Mega Beedrill (a natural 3 star!) will end up having more offensive stats than Karen & Houndoom. Due to the semi-Tech elements of Karen & Houndoom’s kit, they incur the drawback of hitting some limitations in terms of absolute power.

Karen has the perfect Trainer Moves to boost Houndoom’s offensive capabilities, so pairing Houndoom up with Support Pairs who can stack even more of the same buffs is the most direct way to support it. For Houndoom, those would be Sync Pairs with party Sp.Atk and Dire Hit buffs, making sure Houndoom gets +6 Sp.Atk and +3 Dire Hit. Speed and immediate Move Gauge Replenish also have their uses for helping dish out additional damage.

Become Mega Houndoom until the end of battle. 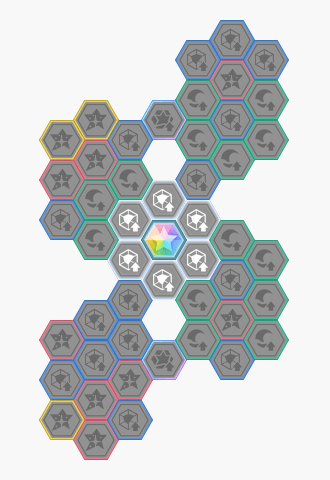