One of the game's best damage Mp-independent damage dealers, Crobat can be considered the Poison counterpart to Torkoal and its Burn Synergy Embers. As a Poison user and less bulky pair all-around, Crobat fulfills a much more offensive role than its parallel. It achieves this by making up for the loss of Burn's defensive utility through the sheer power of Toxic Poison's scaling damage and Venoshock's base power. It's because of these things that Crobat is such an excellent choice for powerful Battle Villa defensive cores like Mew-Swanna as well as an extremely important part of the Legendary Arena meta where it's by far the most practical Poison user. 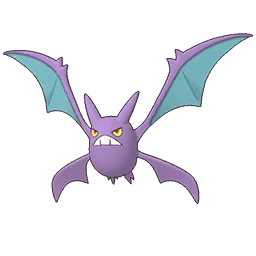 Its fangs are so sharp, if it bites you in the dark and sucks your blood, you won’t notice any pain or realize you’ve been bitten.

Toxic
Speed Up: Self
Poison 2x Damage
Evasion Up: Self
Crit Chance Up: Self
Speed Decrease Immunity

Poison Fang
Has a good chance of leaving the target badly poisoned.

This move’s power increases if the target is poisoned or badly poisoned.