With debuffs, Evasion, self healing, Flinch, and most of all damage in spades Lycanroc brings a lot to the table, but its reliance on Sand puts it in the tough position of vying for the same spot as what would normally be a main tank on Pallosand-Garchomp. This sacrifice heavily reduces the team's survivability, but the sheer amount of Tech utility Lycanroc provides does allow it to compete on a somewhat even footing for the spot. By losing pairs like Renuiclus or Swanna in favour of Lycanroc, you exchange the ability to shrug off a certain number of powerful hits for Leer's increased damage, Staggering Accelrock's Flinch chance, and Shifting Sand's small but useful Evasion chance. This choice mostly depends on the opposing pairs the team aims to beat and general player preference, but Lycanroc's Grid has made it a find choice to round out standard sand. 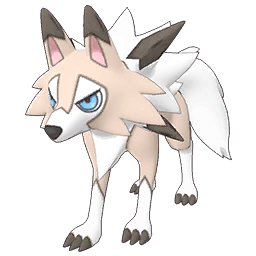 The sharp rocks in its mane can cut like knives. Lycanroc wears its prey down by degrees before finishing them off.

Speed Down: An opponent
Move Uses Up: Self
Attack Up: Self
Defense Down: All opponents
Sandstorm Damage Up
Flinch Immunity

Removes physical and special damage-reducing effects from the opponents’ field of play.