One of the first pairs to properly pull off an Evasion-based kit, Ribombee is far more than just another seasonal proof of concept 'mon. By compounding teamwide defensive buffs, Gauge support, the absolutely incredible Dire Hit +, and solid tanking abilities into a single role, the pair enables a massive number of comps that were previously either impossible to pull off or entirely reliant on Blastoise (Zekrom-Luxray being one of the most relevant examples of the latter). Even outside of the overloaded teams that depend on powerful Dire Hit tanks like it as the fulcrum of their defenses, Ribombee remains an excellent sideman on any composition with the Gauge to sustain it through the sheer utility it brings to the table. 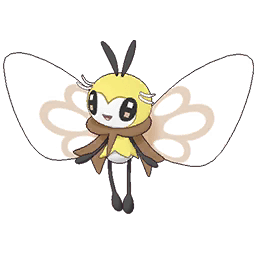 Rain makes pollen damp, so Ribombee hates rain. When it sees ominous clouds, it finds a hollow in a tree, where it waits stock-still.

Crit Chance Up: All allies
Move Gauge Up: Self

Leech Life
Restores the user’s HP based on the amount of damage dealt to the target.
Dire Hit All +
Sharply raises the critical-hit rate of all allied sync pairs.
Alola Lang Syne!
Blocks status conditions from affecting the allied field of play. Sharply raises the evasiveness of all allied sync pairs.
Move Gauge Boost
Increases the user’s move gauge by three.

Makes all allied sync pairs gradually heal themselves after the user uses a sync move.

Has a small chance of reducing the user’s sync move countdown by one when an opponent’s attack move targeting the user misses.

Has a small chance of raising the Attack of all allied sync pairs when an opponent’s attack move targeting the user misses.