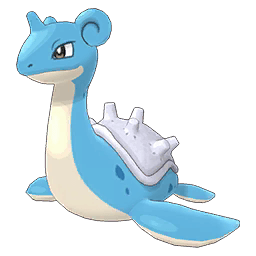 They’ve been so cherished that there’s now an overabundance. The fish Pokémon population has declined in waters with too many Lapras.

Freeze
Speed Up: Self
Hailstorm Sure Hit
Defense Up: Self
AoE Damage
Stat Condition Rate Up

Lorelei & Lapras are quite good on their own, but the idea that they could be much better if certain conditions are met is something always on the horizon.

Attempting to meet those conditions severely limits the flexibility of the Team overall, at least with the game’s current roster.

That is the Monkey’s Paw of an otherwise solid Sync Pair.

Despite how conditional Lapras’ toolkit is, her moves are still quite powerful, even if not all Buffing conditions are met.

“Brace Yourself!” is especially great because it takes some of the pressure off of the Support of the Team by giving Lapras a bit of Self-Healing.

Too many of her Moves rely on the Enemy being Frozen or a Hailstorm being active.

This means she needs to be paired with other Sync Pairs who can Freeze Enemies, and definitely have one who can cause a Hailstorm.

All this limits her to Ice Teams, which doesn’t lend well to Team Flexibility.

Lapras should be paired with Teammates who can cause Hailstorms, such as Candice & Abomasnow.

Ice Beam
Has a very small chance of leaving the target frozen.

X Speed
Sharply raises the user’s Speed.
Blizzard
Never misses during a hailstorm. Has a very small chance of leaving the target frozen.
Brace Yourself!
The lower the user’s HP is, the more this move raises the user’s Defense. Makes the user gradually heal itself.
Hide Info

This move’s power increases if the target is frozen.