With Metagross level stats straight from the outset of each match, Pheromosa is second to only Volcarona and perhaps Sceptile in its role as one of the most effective early game strikers in the meta. While it lacks the level of universal utility that makes Charizard the best choice for maybe 60% of stages, its sheer immediate power allows it to do something the latter often finds difficult: remove priority pairs from the opposing side of the field before they have time to become threatening. This affords it a massive advantage against stages with team-buffing or screen-setting opponents, while its dual typing and the debuffs inherent to its moves provide it another two niches safe from Charizard's near omnipresent shadow. Unfortunately, the pair's extreme frailty can often make it difficult to maintain, and it's often outclassed on the general dps front by contemporaries like Sceptile and Alder who's damage stems more from buffs than stats. To conclude, Pheromosa excels in its niches but can easily fall flat anywhere outside of them, so while everyone should definitely scout one it's far from most important thing in the game. 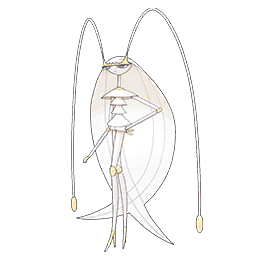 A life-form that lives in another world, its body is thin and supple, but it also possesses great power.

Sp. Def Down: An opponent
Freeze
Hailstorm Sure Hit
Endure
Move Gauge Up

Drastically raises the user’s Attack and Sp. Atk when it knocks out an opponent with a move.