Nanu & Persian have self-buffs for Speed and Evasion, and furthermore can give themselves 100% Critical Hit Rate for one move (two times). Persian has the capability of setting up deadly combinations, with usage of 100% Critical Hit chance, a Bite with boosted Flinch on Crit due to their passive, followed by their Sync Move, which deals bonus damage to Flinching opponents. He requires setup to function well, but due to his low base stats, his damage ceiling is not quite high enough to place him in higher tiers. 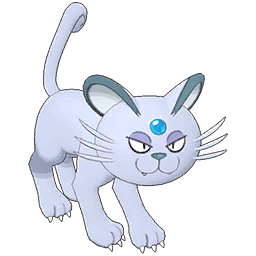 In contrast to its lovely face, it’s so brutal that it tortures its weakened prey rather than finishing them off.

Flinch
Speed Up: Self
Defense Down: An opponent
Evasion Up: Self
Next 100% Critical Hit
Self Crit Confuse/Flinch/Bind Up

A bulky and persistent cat whose only job is getting on your nerves. Nanu & Persian have perfected the art of mentally tormenting the enemy, ensuring they are feeling max frustration at all times. This playstyle makes the duo one of the most amazing Tech Sync Pairs out there. Nanu & Persian come with an arsenal of status conditions and debuffs fit to drive any Sync Pair insane.

Between Bite’s chance to cause enemies to Flinch, and Screech’s ability to drop enemies’ defense by -2, Nanu & Persian are already obnoxious. But things get ridiculous when taking into account their passive, Critical Sting 1, which means that any move that lands as a Critical Hit has a raised chance to make the target Flinch, become Confused, or become Trapped based on the move’s additional effect.

And, as if all these weren’t enough, Nanu taunts foes with “Just warming up...” which not only raises Persian’s Evasion sky-high, but also ensures that their next attack will be a Critical Hit, triggering Critical Sting 1.

Overall, Persian is a bulky, dodging cat that will be on everyone’s face, a nuisance of a Sync Pair that nobody wants to deal with. Perfect for a Tech Pair!

Persian Must be Attacking

While Persian can inflict a lot of Status Conditions, Persian must be the one on the offense, and having so many statuses and debuffs on its moves means that the actual damage output tends to lag behind. While this is definitely a flaw, the good news here is that Persian is so bulky that your Striker should be safe as long as Persian is in play. So one could say that once Persian is finally down, your Striker will proceed to steamroll the debilitated enemies.

In the end, perhaps not a “real” weakness, but definitely something to keep in mind.

Persian must be the bulkiest unit on your team if you want to make good use of him, so that he can be focused down first. If you have a bulkier Support on the team, then it means that Persian’s low damage output will drag the battle out until your Support is dead, and then Persian tanks. Once Persian dies, only your squishy Striker will be left, so your hopes of doing a lot of damage will come to a crashing halt.

But consider a scenario where Persian is the bulkiest, and then you have a secondary Support behind him. Then Persian can do his shenanigans until he is finally defeated, where your Striker Sync Pair will begin dealing damage while still having one Support Sync Pair to hide behind.

Therefore, it is recommended to use a 1x Tech 1x Support 1x Striker composition when using Nanu & Persian.

Bite
Has a moderate chance of making the target flinch.
Unlock Requirements
Unlocked by Default

Training Machine x5
Just Warming Up...
Sharply raises the user’s evasiveness. Ensures that the user’s next attack will be a critical hit.
Move Unlock Requirements

Its power increases if the target is flinching.

When critical hits land, raises the chance of making the target flinch, become confused, or become trapped with the additional effect of the attack.