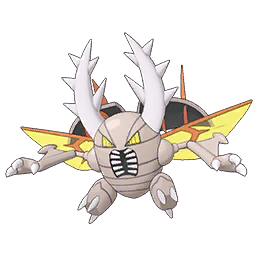 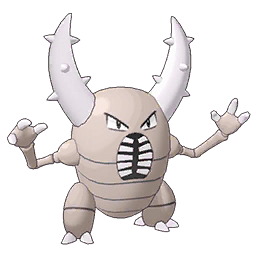 Repeat Use Damage Bonus
Attack Up: Self
Speed Up: Self
HP Up: Self
Stat Decrease Immunity
Attacks Ignore Damage Reduction

Despite starting as a 4 Star Sync Pair Pinsir is, without a doubt, one of the game’s top Physical Strike options. With Mega Evolution, a fantastic set to call upon, and access to one additional level of Potential Upgrade, Pinsir is a very powerful pair for anyone fortunate enough to pull it from the Gacha.

Pinsir’s Fury Cutter may seem dull and uninspiring at first glance, but it is actually a fantastic damage source. The doubling of power per consecutive use is no longer shackled by the slow and cumbersome turn based combat employed by the main games. In Pokemon Masters, one only requires 4 consecutive uses to hit Fury Cutter’s Base Power cap of 64 (or 72, at max Sync Level). As Fury Cutter only requires one bar of the Move Gauge, there is almost no downtime between moves.

Noland’s unique move, Bring It On, further accentuates Pinsir by granting it a hefty Speed boost (+2). This further reduces the time needed to queue the next move. This also restores a bit of Pinsir’s HP, keeping it in battle for a longer period of time.

Mega Evolution not only turns Pinsir into the Pokemon with the highest Base Attack in-game (as of writing time), but also a juggernaut, with two highly powerful Passive Skills to play with. While in its Mega Form, Impervious replaces Headstrong, allowing it to retain all the stat boosts accumulated. Similarly, Unhindered allows Mega Pinsir to ignore all damage reduction effects on the opponent’s field of play. This tool comes in handy in EX Challenges that employ such tactics.

Being a 4 Star Sync Pair means that Pinsir has one additional level of Potential Upgrades when compared to its 5 Star brethren. This further accentuates this Sync Pair’s already very scary damage output.

Fury Cutter, while powerful in the context of Pokemon Masters, suffers from the need to be used consecutively to gain and retain its power. This means that something like Pinsir’s own Sync Move can and will break the chain. This forces Mega Pinsir to rechain, resulting in 3 turns of reduced damage.

Pinsir’s set revolves heavily around keeping up a steady stream of attacks, which cost next to nothing after factoring in Bring It On and Fury Cutter’s Move Gauge requirement. However, such a strategy comes with the weakness of racking up chip damage from Status Afflictions and Weather Conditions.

Pinsir greatly appreciates tanky support Sync Pairs that not only redirect attacks away from it while it sets up, but also maximize its damage output. A great example would be Phoebe and Dusclops, who can buff Pinsir’s Critical Hit rate and Attack with Dire Hit All + and Unbreakable Bonds respectively.

In single player, players can also opt to run Pinsir alongside certain Strikers, like Brendan and Sceptile, to rotate attacking and set up duties. Sceptile can strike after one turn of No Turning Back, which charges up the Sync Move meter and deals powerful damage while Pinsir is busy setting up. When used effectively, Pinsir only needs to chain its Fury Cutter once, after it Mega Evolves, as it takes over attacking duties post Sync.

Both aforementioned Sync Pairs can work as partners to Noland and Pinsir in co-op, with both rather efficient at charging up the Sync Move meter. Dusclops can pass its accumulated Critical Hit rate and Attack boosts upon being KOed so that Pinsir comes in ready to go, while Sceptile can soften up the field for Pinsir to come in and clean up.

Fury Cutter
This move’s power increases when used in succession.

Become Mega Pinsir until the end of battle.

When the Pokémon attacks, ignores damage-reducing effects on the opponent’s field of play.