This Sync Pair is cursed with being a Normal Type. This means they will never be able to deal super effective Damage and this is a huge flaw in a game where elemental advantage doubles Damage. As a result, there are very few cases where Norman & Slaking make for a good Team option. This is why he is not currently ranked higher on this list. 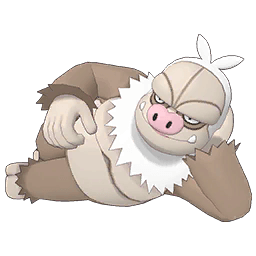 Slaking spends all day lying down and lolling about. It eats grass growing within its reach. If it eats all the grass it can reach, this Pokémon reluctantly moves to another spot.

Paralysis
Attack Up: Self
Recoil
Move Gauge Up: Self
HP Up: Self
(Deprecated, to delete) Normal Type Only
Low HP Power Up

Slaking has a powerful, but fairly basic toolkit that doesn’t require a lot of work or strategy to perform well with.

Double-Edge should be used earlier on so that “All-Out Effort!” can recover the Health and Move Gauge, but aside from that and low Defense and Speed stats, Slaking is pretty good for his Star Level.

All his Moves are incredibly strong--his Sync Move is one of the most powerful by Damage--and are supported by a high Attack stat, stat Buffers, and Move Guage Recovery to keep those heavy-hits coming.

“All-Out Effort!” is a Move that is typically seen on Supports like Rosa’s Pokemon, so this is an excellent addition to make the Team more well-rounded.

Very Slow and Not Very Durable

Slaking is very slow and his Defenses aren’t very high, meaning he is all the more reliant on the Support on the Team--it definitely wouldn’t hurt to add someone who can Boost that Speed stat.

As a Normal Type, Slaking will never have a type advantage over his Opponents, which means his Attack stat has to work that much harder.

With the exception of “All-Out Effort!” in Solo Play, Slaking is pretty self-serving but can take care of himself. This mean’s he’s a good choice on an all Physical Strike Teams, or well-rounded ones with a Support that Buffs both Offense stats.

Body Slam
Has a moderate chance of leaving the target paralyzed.
Unlock Requirements
Unlocked by Default