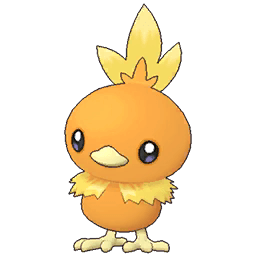 Torchic sticks with its Trainer, following behind with unsteady steps. This Pokémon breathes fire of over 1,800 degrees Fahrenheit, including fireballs that leave the foe scorched black.

Torchic is a fairly powerful support with a very general toolkit that can be effectively used on nearly any team. Being one of the most useful free pairs the game gives you, Torchic is both an easily accessible and effective support that will work for you no matter what other pairs you have. However, despite its versatility, it suffers from a lack of specialization, and is seldom the optimal choice for a specific team composition.

While Torchic’s capacity for buffing both Atk and Sp.Atk mean one or the other will often be wasted on Strikers who can only use one or the other, it also means that any team can benefit from Torchic’s buffs. On top of this, "Blazing Hope!"’s buff to Critical Hit Rate is a powerful tool for any team to have access to, and because it also boosts Sp.Atk, it can still be a massive time saver on teams that already have a Dire Hit All+ user for their Crit. buffs.

Being able to buff both Attack types to +4 and Critical Chance to +2, Torchic offers a wide selection of buffs that can benefit many teams, that being said, most can only really take advantage of some aspects.. Doing so many different things means Torchic misses out on the sheer power of a move like Dire Hit All+ or a secondary ability like refilling the Move Gauge or healing its teammates, things Torchic’s competition (e.g Serperior and Swanna) provide ample amounts of.

While by no means a frail Pair, Torchic struggles to match the bulk of other free support pairs like Serperior or Stoutland, which makes it a poor choice as a team’s only support. This hurts its all-important versatility by making it require another support to be an effective wall for a Striker.

Torchic can be used in a variety of compositions, but tends to be most effective when used with specific types of pairs. Other supports who can increase the team’s Critical Hit Rate like Meditite can be combined with Torchic to give the striker 100% Crit. Chance. Additionally, mixed attackers like Sceptile who can take advantage of both sides of Torchic’s buffs make up the strikers who can benefit most from Torchic’s set of skills.

Should You Pull? Lusamine & Necrozma

Should You Pull? Grimsley & Bisharp

Should You Pull? Guzma & Buzzwole

Should You Pull? Jasmine & Celesteela

Should You Pull? Hilda & (Mega) Diancie

Should You Pull? Diantha & Keldeo

Incredibly hot take
gen 7 wasnt that bad 7 posts - 5 participants Read full topic …
What are your favorite in-between evolutions?
By this I mean: for pokemon lines with 2 evolutions, which are some of your favorite…
Primal Groudon and Kyogre be coming?
So looking at the story, we know that the sync stones’ power is still being researched…
Let's take a moment to appreciate Blue
I started the new arc today (I’m trying not to rush the story too much, to savor it)…
Stuck on Opening Loading Screen Error
Recently I got a new phone, one that’s finally capable of playing Pokemon Masters…
Read More