Another victim of the game's rapidly accelerating powercreep, the release of Blastoise completely removed its niche from existence. The latter does everything Delibird does but with the additional utility provided by Critical and Defensive buffs as well as massive bulk and access to Six Star EX. While it could still potentially fill a role as an attack buffer when Blastoise is indisposed up until the Family Ties Event, the release of the far superior Clefairy was the final nail in the coffin for a pair that now only sees use by returning players from the early days with nothing better available to them. 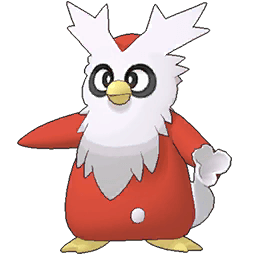 It shares its food with people who are stranded. Because Delibird is omnivorous, sometimes it gives those people bug Pokémon.

Restores the Pokémon’s HP whenever it takes an action during a hailstorm.