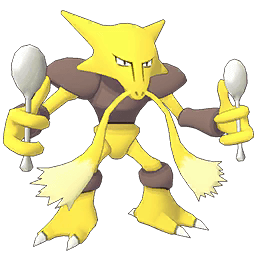 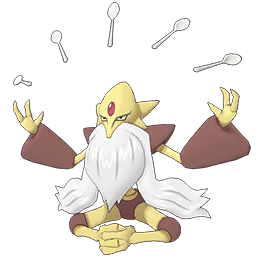 Alakazam uses its psychic powers to make the spoons it carries. Each spoon is an original that there’s only one of in the whole world.

Alakazam is a highly versatile Sp.Atk focused Support whose wide range of applications make it a great choice for a huge variety of Teams. Need Critical Hit Chance? Sp.Atk? Healing? Damage Reduction? Alakazam has got you covered. It’s also one of the very few Pairs capable of boosting its teammate’s Accuracy and can even serve as a secondary Damage dealer if the Team’s Striker falls to Aoe or Recoil. Overall, Alakazam is one of the game’s best Special Supports and an excellent pickup for anyone planning to use lots of Special Attacking Damage dealers.

Usually, the most versatile Sync Pairs trade some amount of power for their immense flexibility. Not so with Alakazam, who’s “Sixth Sense!” can easily max out an allied Pair’s Sp.Atk.The only area where Alakazam’s buffs are any weaker than more specialized Supports is its Critical Hit Buff, Dire Hit All, which can only give team +2 out of +3 possible Crit bonuses. However, because a Pair at +2 will still score a Critical Hit four out of five times, it’s rare that this becomes a significant issue.

One of Alakazam’s greatest strengths is the sheer amount of different things it is capable of. With only a single Team Slot, Alakazam users gain access to a huge variety of powerful abilities. It can heal Pairs that rely on Moves with Recoil, provide Team-wide Damage Reduction, and of course close to maximize any Specially Offensive Striker’s Damage output. This makes it the optimal choice of Support for a huge number of different Team comps.

For all of Alakazam’s incredible utility, there’s one big thing it can’t do: boost Physical Attack. This weakness is what stops Alakazam from becoming the game’s most important Support, keeping it at the level of merely “a great option” by limiting its all-important versatility to exclusively teams with Special Attacking Strikers.

Being the incredible Support it is, Alakazam synergises very well with a huge number of Damage dealers and other Supports. Pretty much any Striker or offensive Tech Pair who can take advantage of its Buffs pairs great with Alakazam, but Damage dealers that suffer from recoil or poor Accuracy like Dragonite and Solgaleo make especially good partners. In terms of other Supports, Pairs who can boost the few Stats that Alakazam can’t (Speed, the Defenses,and Gauge Recovery) are all great choices. In particular, Salamence is a great partner for Alakazam because it does all this and even helps Alakazam survive Physical Attacks through Intimidate.

Psybeam
Has a chance (10%) of leaving the target confused. 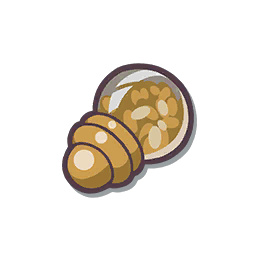 Become Mega Alakazam until the end of battle.

Prevents the user from flinching.

Raises the user’s Speed by 1 stat rank when it enters a battle. 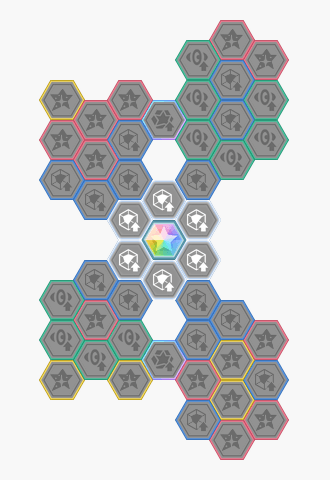