Clawitzer’s stats are low and poorly distributed for his strengths. This means that a Special Strike Pokemon who doesn’t have the proper toolkit but does have better stat distribution will outperform Siebold & Clawitzer. 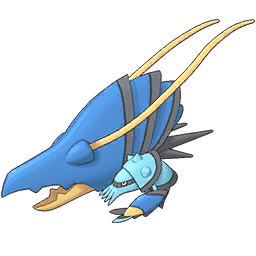 It compresses the water it has sucked up and then projects it with enough power to punch a hole right through a thick sheet of iron.

Confusion
Sp. Atk Up: Self
Sure Hit
HP Up: Self
Next Sure Hit
Next 100% Critical Hit
HP Regen
Dual Type
Crit Chance Up

As a Special Damage dealer, Clawitzer does his job well, and even does a bit of Self-Healing so the Team Support doesn’t have too much on their plate.

While by no means a Glass Cannon, this Pokemon is a little on the slow side and a lack of Passive Skills makes him a little more vulnerable to Debuffs and status afflictions.

Jack of All Trades

Clawitzer can do a little of everything: Self-Heal, Self-Buff, inflict Debuffs, one of his Attacks can’t miss, and having two different Type Advantages mean he’s more likely to have an Advantage over the Enemies he faces--and there aren’t many Electric Pokemon yet, so he’s not as likely to be weak to Enemy Attacks.

By using “Aura Sphere” and “The Definition of Art!” together, Clawitzer can guarantee landing two Critical Hits that won’t miss. This works especially well with his Passive Skill, “Critical Focus 1”, which further increases his Critical-Hit Rate for each Critical Hit previously landed.

While Clawitzer definitely excels at Special Damage Dealing, every other stat suffers for all the focus being put on Sp. ATK. Ignoring Attack, which he can’t use with the Moveset he has, Speed is his lowest stat, when it should really be higher.

Being able to land more Critical Hits and having a Type Advantage with a Water and Fighting Move makes Clawitzer quite the target early on.

Being paired with an Ally who also Boosts Critical Hit Rate is a must, but it wouldn’t hurt to include someone who can direct Damage to themselves or can Inflict Sleep or Paralysis to keep some of the heat off Clawitzer.

X Sp. Atk
Sharply raises the user’s Sp. Atk.
Aura Sphere
Never misses.
The Definition of Art!
Restores a tiny bit of the user’s HP. Ensures that the user’s next attack will be a critical hit. Makes the user gradually heal itself.

Raises the user’s critical-hit rate when the user lands a critical hit.