As far and away the best Hail Setter and Invigorating Hail user in the game, Alolan Sandslash's viability would already be assured as the pair that defines one of the major weather archetypes even without its myriad of other strengths. As it is, with the duo being mostly self sufficient, possessing what is effectively a 75-120 two bar move depending on Grid investment on top of a solid Attack stat, and applying Freeze more consistently than any other pair in the game, Steven can't be called anything but a top tier Striker. Its one and only real weakness, the fair bit of time it takes to reach max Crit as it waits for its Sync Move, is near completely mitigated by the sheer amount of damage the pair is capable of after the Sync Counter is quickly depleted by Icicle Spear's incredible spammability. 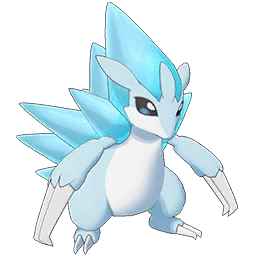 It runs across snow-covered plains at high speeds. It developed thick, sharp claws to plow through the snow.

Attack Up: Self
Hailstorm Immunity

Icicle Spear
Attacks the target two to five times in a row.

Causes a hailstorm after a sync move.

Powers up moves in a hailstorm.