A decent Offensive Sync Pair who has Passive Skills that prevents them from losing Attack or Defense. This and “Zen Headbutt”, which can cause the Enemy to Flinch make Solrock a good Offensive choice.

Tate’s “X Attack” and “All as One!”, which doubles all raised stats, make it easy for Solrock to achieve +6 Attack and +3 Critical Hit Rate if Teamed up with a “Dire Hit All” Support. Overall, Solrock is a solid Damage dealer. 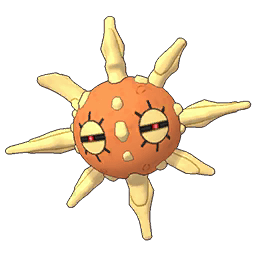 Solrock is a new species of Pokémon that is said to have fallen from space. It floats in air and moves silently. In battle, this Pokémon releases intensely bright light.

Zen Headbutt
Has a small chance of making the target flinch.

X Attack
Sharply raises the user’s Attack.
Rock Tomb
Lowers the target’s Speed.
All as One!
If the user’s stats have been raised, the amount of increase is doubled.