Enables the powerful but generally suboptimal Electric Terrain archetype while remaining a decent offensive sideman in its own right, Luxray is on the upper end of mediocre for now but has the potential to become a centralizing force along the lines of Acerola & Pallosand should a sufficiently powerful Electric Striker be introduced. 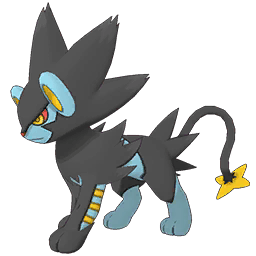 When its eyes gleam gold, it can spot hiding prey—even those taking shelter behind a wall.

Lowers the Attack of all opposing sync pairs when the Pokémon enters a battle.