In Pokemon Masters, this Sync Pair is somewhat different from it’s frightening main game counterpart. They are a Sync Pair that focus on Debuffs and inflicting Status Conditions. Unfortunately, Normal Type Moves mean they are unable to deal super effective Damage. 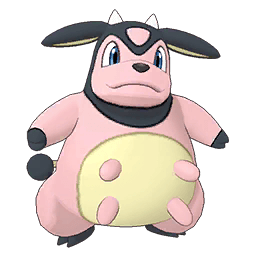 It produces over five gallons of milk a day. The higher the quality of the pastures it lives in, the richer and tastier its milk becomes.

Paralysis
Speed Up: Self
Flinch
HP Up: Self
Defense Up: Self
Attack Up

Miltank is good at dealing consistent Damage that has a decent chance of Paralyzing the Enemy, but her toolkit and stat distribution don’t quite make up for being a Normal Type with no Type advantages.

Despite having an average Attack stat, Miltank still relies more on RNG and Team Buffs to improve that, since “I’m All Kinds of Strong!” fuels her Tanking power.

Miltank’s Attack stat is average, but her Offensive moves are powerful for their cost and each have a moderate chance of inflicting Flinch or Paralysis. Paralyzed Enemies also take more Damage from her Sync Move and she can occasionally Boost her Attack through the Mad Strength 2 Passive Skill.

Between her Sync Move and Passive Skill, Miltank’s toolkit is pretty reliant on RNG. Since that Passive is the only way she can Boost her Attack stat, she’s also pretty dependant on having good Support on her side, when the better alternative might just be to choose a different Sync Pair for Team Offense.

Having no Type advantage should mean that a Sync Pair is overpowered in other ways to explain that massive disadvantage, but Miltank is a pretty generic pokemon.

Because of how powerful her Sync Move has the potential to be, it’s best to put Miltank on a Team with other Paralysis inflicters to improve her odds. Speed Buffing Support wouldn’t be a bad idea either.

Body Slam
Has a moderate chance of leaving the target paralyzed.

Has a moderate chance of raising the Pokémon’s Attack when one of its attacks is successful.