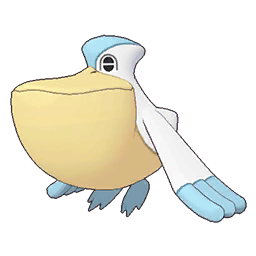 It places small Pokémon into its spacious beak and carries them around. No one knows where it’s taking them.

Flinch
Rainy
Defense Up: Self
Speed Up: Self
Confusion
Rainy Sure Hit
Rainy Move Gauge Up

Winona & Pelipper are an interesting Pair in Pokemon Masters since they are currently the only Sync Pair that can use Rain Dance. Luckily, they make the most of it, making this Pair a nice option for both single-player and co-op.

Pelipper is absolutely necessary for players intending to abuse the Power Boost to Water Type Moves or Racing Rain 2. Pelipper’s Move Gauge Refill Speed doubles when in rain, making it a good way for players to refill the move gauge for her Strike Allies in single player.

In co-op, players can use this extremely fast refill speed to charge their Sync Move meter so they can bring in their Strike Ally in 1 turn before Sync. This can also be extended to Unity Attack charging since Players can use the high concentration of moves to help with chaining and accumulation of the meter.

As a Tech Pair, Pelipper suffers from lackluster stats that are only slightly redeemed by Potential Upgrading. Her status heavy toolkit also falls apart in the Very Hard difficulty levels for EX Challenges due to the bosses largely being immune to the likes of Flinch and/or Confusion.

Rain being a perishable form of Weather means that Players are racing against the clock to get their Strike Pair set up to fully utilize the Power Boost before the Weather condition expires.

This can be mitigated in co-op by leading her with two favorable allies like Kris, where all three players set up for 2 turns before Pelipper uses Rain Dance to optimize the Rain turns.

Sync Pairs that synergize with Winona generally fall into either of the following two categories: Water Type and Racing Rain 2 users.

Sync Pairs like Kris, Hilbert, and Siebold all appreciate the Power Boost granted to their Water Type Moves from Rain Dance. In single-player mode, the Move Gauge Acceleration can allow Players to execute Moves like Mega Kick much faster.

Sync Pairs like Crasher Wake and Clair benefit from Rain to double their Move Gauge Refill speed, which allows them to execute Moves at a faster rate. Crasher Wake, for example, enjoys the Speed Boost in helping to cause Flinch through Waterfall, which then feeds back into Pelipper’s Sync Move, which increases in Power when the Foe is Flinching.

This move’s power increases if the target is flinching.