Should You Pull #1: Lyra & Chikorita 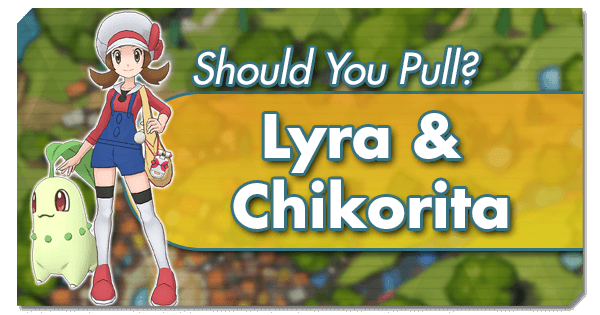 Lyra & Chikorita is a 5* Support Sync Pair. Chikorita can evolve into Bayleef at Lv30, and into Meganium at Lv45. Lyra is one of the few Sync Pair trainers who has a wide arsenal of buffs, granting allies increased Attack, Special Attack, Speed, and Critical Strike Chance via “Sunny Side Up!” and “Dire Hit All”, making the Sync Pair extremely valuable. In terms of niche-situations, Chikorita also has access to Light Screen, which reduces the overall damage taken from Special Attacks, making Lyra & Chikorita a well rounded Support Sync Pair.

Multiple Buffs in a Single Skill

In Co-op, one does not have the luxury of buffing as much as in Solo play, with the ability to quickly use only 1 or 2 buffs before switching to offense being ideal. A great strength of Lyra’s is that she can raise Speed, Attack & Sp.atk with just one skill. The increased stats are doubled during Sunny Day, making Lyra an extremely good buffer for Co-op as it requires fewer turns to strengthen up your allies.

Chikorita can evolve twice, with their final form being Meganium.  Meganium comes with 722 Health Points at level 100, which can be further increased to 822 via Golden Promotion tickets. This is one of the highest health Sync Pairs in the game, and allows Meganium to take a beating before going down.

At this point many of you have tried out the Ch18 Co-op encounter (vs Cheren) to unlock gears, and perhaps even cleared the Very Hard version. You should by now have experienced Emboar’s Rock Slide, and how Roxanne & Nosepass can help the team out with Wide Guard. Lyra  & Meganium are capable of offering half damage reduction against Special Attackers of both the AoE and single target variety via Light Screen, and players should keep her in mind if having trouble with a Special Attack user.

Lyra’s Meganium does not have the best defensive values, as the majority of its bulk is made of Hit Points. Its Defense is especially low, where the user should wary when facing encounters with Physical attackers. The Special Defense could be higher, but with Light Screen, Meganium is still able to fulfill the role of tank properly. However, this does mean that a drawback of Lyra’s tanking capabilities comes with a cost of having to use a support move.

Meganium only has one offensive move, Energy Ball. Since it is a support unit, one doesn’t expect it to do hefty damage, but only having access to Energy Ball does limit Meganium quite a bit in scenarios where just a bit of extra damage output is needed for a clutch victory.

The Sunny Day Passive is both as a strength and a weakness, but is listened under weaknesses because Meganium cannot use Sunny Day on her own. Another reason this is listened as a weakness is because the majority of buffs Lyra does are +1 stat increases, while in most cases there are other support units who can boost a stat by +2. Rosa & Serperior, for example, can use X Sp.Atk All, which would make Meganium look at bit inferior in certain situations.

Lyra & Meganium has amazing starting capabilities. When it comes to Co-op, today we have the option to go online and search for communities via Discord or Subreddit, where we can play with others. Merely playing with friends is also a possibility. In terms of Team Synergy one could organize the party such that 2x Trainers start with their Strikers, and then the last Trainer could start with Lyra, getting up a Light Screen if needed, or buffing allies with “Sunny Side Up!”. The support move will raise both Attack, Special Attack, and Speed, which would benefit both Strikers, followed by a Dire Hit All for increased Critical Chance. This works extremely well if your allies have Olivia & Lycanroc, so they get their Speed faster and be ready to do some serious damage.

Due to the nature of Meganium’s giant health pool, she is the best choice to switch in to soak up an enemy’s Sync Move, where she can buff entire team up right after and then switch-out for another Sync Pair to proceed with combat.

When looking at Lyra & Meganium, I have a belief that she will do extremely well against Special Attackers, to the point one might look at her as the “Roxanne & Nosepass” for Special Attack encounters. Roxanne & Nosepass are perfect against Physical Encounters with “Wide Guard” and “X Defence All”, while Lyra & Meganium have a similar feeling both for Special Attackers, with “Light Screen”. In a sense, if Nosepass were considered “Anti-Physical”, then Meganium would be “Anti-Special”.

Lyra can also be compared to Phoebe in a sense as they both raise allies’ Critical Chance. The biggest difference here is that Phoebe raises the Move Gauge of all allies, and has the potential to increase Attack by more than just +1, whereas Lyra is more general in application, and increases the gauge by speeding up allies, so it is an indirect Gauge gain, and in effect makes them very similar.

We know how useful Roxanne and Nosepass is, Lyra will be the same, except as a defender against Special Attackers. It is entirely possible that there will be encounters where Light Screen will change the flow of battle, making the Sync Pair useful and in a niche of its very own. When making defensive strategies, one should consider whether its Physical for Nosepass or Special for Meganium.