Should You Pull #10: Lance & Dragonite 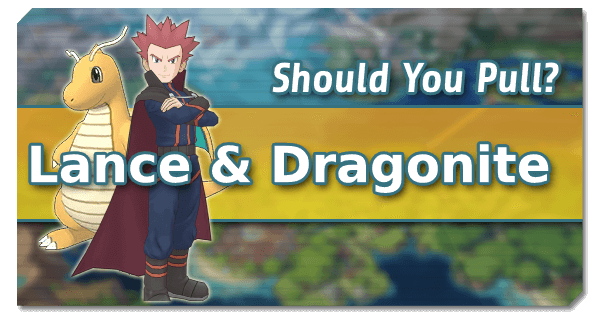 Lance & Dragonite is one of the recent addition to the Pókemon Masters Universe, and hell of a burster, Comes with one of the highest Special Attack and Attack at the same time, really ranking this Sync Pair on the offensive.  But with great power comes great responsibility, Hyperbeam costs a outrageous 4 Gauge, so before attempting to burst someone think twice.

Lance & Dragonite definitely has one of the best offensive stats in the current state of the game. They feel like a powerhouse that can do a lot of damage, especially with the passive "Dragon Shift" which allows hyperbeam to be a Dragon-type move with 223 Power. Enough to blast anyone away.

Dragonite can't be flinched or paralyzed, nothing is going to stop it's onslaught.

A strong kit that sacrifices everything to deal more damage

Dragonite can recover gauge up to 6, but at a cost, Dragonite sacrifices half of its health to refill the entire gauge, which will allow the user to hyper beam twice in row.  This is both a Strength and a Weakness. Do keep in mind that Lance also has access to potion, so a bit health recovery is possible.

Accuracy is a problem

I know, I know, I just stated the strength, and burst, but you see, I must analyze and say as it is. Dragonite will deal tremendous amount of damage, but sadly it comes with 90% accuracy, and dragonite doens't have any accuracy buffs, so one must remember that it is possible to miss a Hyper beam and doing so will really matter a lot.

Hyper beam costs too much.

Hyper beam has 223 Power move at 1/5, if you get a 5/5 Dragonite, it will be 267 Power move which is a lot, combined with the offensive stats 442 Special Attack at max potential. You will have a monster, but it costs 4 gauge to use each time. So while you do have the damage, you sadly do not have the Gauge to keep up hyper beaming, so the Gauge Cost is a huge flaw that you should keep in mind.

Before I go into the Team Synergy, I would like to reach a conclusion on how I see Lance & Dragonite. They managed to create a very strong power house, but limited it via gauge and accuracy, So yes, if your wish is to have a sync pair who deals a lot of damage. Lance & Dragonite is the Sync Pair you have waited for, due to its accuracy and gauge cost flaws I just still believe that the limitations are greater than gain and thus conclude Lance & Dragonite to be a Sync Pair one shouldn't pull for.

But what if, multiple people uses Lance & Dragonite?  now imagine the following scenario.  3x Lance & Dragonite all level 120 and max potential 20/20, which means 442 Special Attack and  they are also 5/5 for the sweet 267 Power Move Hyper Beam,   now all 3 Dragonites would use Hyper beam twice , after that all sacrifices half health for 2x additional Hyper Beams and there you have it.12 x Hyper Beams used at enemy within 5  Game Turns. 12 times 442 Sp.atk + 267 Power Move. This could blast perhaps many encounters, and thus  Lance & Dragonite could become Tier EX/God  for devastiating every single content in the game.

As I type this. The Sync Pair isn't out yet, so it is speculations. It is my job to present you all known facts and help you reach a conclusion.  I thereby would like to state that I perhaps don't see the above strategy to work, but I wish / hope it will.  So if you ever feel like trying it, let me know how it goes, otherwise. I sincerely do not believe that Lance & Dragonite are worth pulling.

No you should not pull.

- You wish to throw your phone at the wall? Lance & Dragonite will help you do that.

- They are a powerhouse but comes with a lot of flaws.