Should You Pull #12: Ethan & Cyndaquil 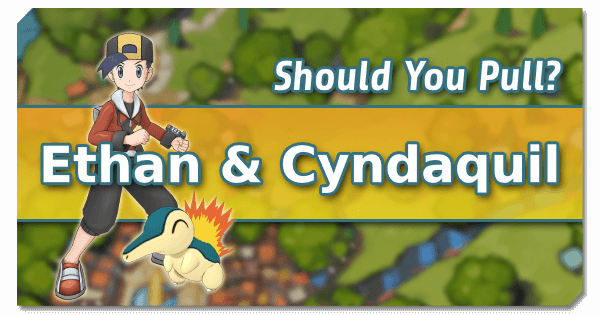 Burn
Sp. Atk Up
HP Up
Speed Up
Evasion Up
Sunny Move Gauge Up

Ethan & Typhlosion is one of our newest Sync Pair in the Pokémon Masters Universe.  Typhlosion is already one of the best AoE Fire Sync Pairs, but sadly the same can't be said in Single Target.  Comes with base form of Cyndaquil and can evolve twice at 30 and 45, finally being Typhlosion, and also assures us the achievement unlock 15/15 Evolutions, if the player has achieved all previous evolutions so far. If one is to get Ethan they should be assured that the Sync Pair definitely will have its uses.

This needs to be very highlighted. Ethans biggest strength is his move Eruption, it is an AoE. A lot of people throws heat on Ethan stating his damage is low, but honestly speaking Ethan & Typlosion is exactly what Cynthia and Garchomp is. As Garchomp's single target damage is horrible too, making them an excellent AoE Sync Pair. So if you felt Cynthia to be useful, you will find Ethan to be similarly useful as well.

now to speak about Eruption. it is a 135 power move which can further increase to 162 power.  A drawback to this 162 immense power is that the damage output scales with Typhlosions current health in %.  Meaning the less health the user has, the less damage it will do. But do keep in mind that Typhlosion does come with self-healing Support Moves

"Stoke the Fire!"  Ethan has access to a support move which really helps Typhlosion out a lot, grants Typhlosion some self-healing, while also increasing it's  Speed and Evasion, so that it can avoid damage, while also having additional gauge to work with when spamming those AoE moves. To compare for Cynthia again, if you have her and tried her, you will realize it is hard to reach Sync Count as earthquake becomes very Gauge costy and it feels very slow  when you have 4 turns left to use Sync Move.  Typhlosion on the other hand has a passive "Speeding Sun 2" Where during Sunny Day Typhlosion will generate Gauge very quickly, which means the onslaught that usually slows down on AoE Sync Pairs after few rounds won't be slowed down with Typhlosion.

One of the reasons that people should stay away from Ethan is that Single Target damage is extremely low.  You wish to build a strategy where your main objective is to shut down the enemy before they use their sync move? Ethan isn't a recommended Sync Pair then. His Strength is AoE and his Weakness is Single Target

Received Flamethrower when he could get so much more.

Fire Blast exist, but we got Flamethrower, There is still hope that Ethan might get a good Sync Grid in the future where there is a possibility of upgrading Flamethrower.  One should definitely not be sad about having Ethan, but at the current state of game, Single Target tends to be more favored.

Ethan & Typhlosions passive as explained above quickly charges gauge. So for team Synergy it is recommended that one brings Sunny Day.

Ethan's Support moves allows Typhlosion to reach +4 Sp.atk, so one might also find Torchic/Lyra useful, as you can then bring Typlosion to +6 Sp.atk and +2 Dire Hit (additional Speed with Lyra)

Ethan has one of the greatest AoE skills in the game, and self-buffs +  stats to ensure that the AoE department will always be powerfull.  If an encounter requires you to AoE then Ethan should be your best choice, but do keep in mind that he might not be the best choice for Single Target combat.

Due to the current state of game with Emboar and Infernape, it is not recommended to pull Ethan & Typlosion.  I know that I stated Cynthia was worth pulling with almost identical kits, but one should remember that the ground department of the game isn't as good as the fire department, which is the biggest influence of this decision.  Ethan is also not a Limited Sync Pair, so overtime it is expected that more and more users will get Ethan. My recommendation on not pulling is basically letting you all know to stock up on Gems for other Sync Pairs in future, like Leaf next week. But one should not be sad if they get their hands on Ethan. He still has AoE uses

No you shouldn't pull.

- Infernape & Emboar already does a  good job at Fire Damage.