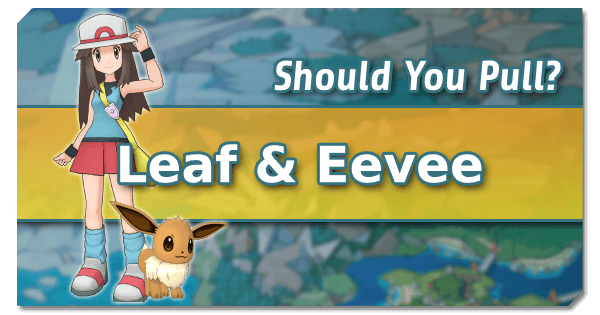 Yes, Pull me and Pet Me Evo!

Leaf & Eevee the Support Sync Pair many of you have waited for. After seeing what Eevee is all about, I've given Eevee the nickname "Sync-Spounge" which is really important to remember as it will describe Eevee's entirely gameplay. She is especially good with Physical Strikers, and Olivia's Best friend, more on that in  Team Synergy. Eevee is a very useful Sync Pair when it comes to premade Co-op, and will open doors for entirely new strategies.

Leaf & Eevee is an entire mechanic that works together, first off one needs to look at Eevee by thinking of everything together. This includes the following

Both Passives  "Impervious" and "Benefactor".  Impervious forbids Eevee from ever reducing buffs, so if Eevee ever gets a buff up, nobody can steal the buffs from Eevee.  Benefactor, when Eevee switches with another Party Member during Co-op.  Eevee is transfering all it's increased stats, to the new Sync Pair in play. For those that has played the original Pokémon games, it is basically Baton-Pass.

Finally our self buffs, both are which are extremely important to the Kit.  "Potion" & "Let's Go!" Potion is self explanatory, meanwhile "Let's Go!" is Leaf's Trainer Support Move which Increases all Sync Pairs Gauge by +2 meanwhile also increasing their Attack +2.

And now for the unique mechanic

Now for those who didn't know yet but in Co-op if you use a Sync Move, the enemy will focus you for 2 turns. by turns it is basically enemy attacks. So Eevee will be the target for the next 2 attacks, which is where Potion is in place. So Eevee can tank and heal.

When the onslaught is over and they have changed target. You can switch Eevee away, and your next Pokémon in line will receive +6 Attack and +2 all other buffs.

So by combining the entire kit, we will have a Sync Pair, who can buff up, ignore stat reductions, heal itself and then swap to a Sync Pair who is ready to go all out.

Can Take Turns to set up

We talked about setting up Attack, using Sync Move and healing  yourself up afterwards. These are a lot of turns, so in terms of a DPS race, having an Eevee will definitely slow the encounter so not every single encounter will need Eevee

If Eevee must use Sync Move, then it means a Mega-Evolution Sync Pair will not be in a position to use a Sync Move, so by using Eevee you are sacrificing Mega-Evolution. I hope one day, DeNA will release additional methods to Mega-Evolve a Sync Pair, but until then Using Eevee means no Mega- Evolution.

It is a Buff Sync Move, not an offensive sync move, do keep this in mind!

A team setup for Eevee would require striker who isn't Olivia to start out first, this could be Brendan, and when enemy is about to sync move or perhaps a round before, you can switch into the Sync Spounge Eevee and start buffing up. After enemy's onslaught, you can then swap Eevee for Olivia. and thanks to the +6 Attack Olivia would only need to self buff once before she is ready to Stone Edge Spam.  So it would be a very powerful Team Synergy. Eevee has everything Olivia needs.

Leaf & Eevee is a new mechanic to the game, some might call it niche, due to its weaknesses, but definitely a gameplay  one should have. So it is highly recommended that you make sure to get Leaf & Eevee. Especially if you already like to use Olivia & Lycanroc.

- The Waifu you always have been waiting for