Should You Pull #2: Hilbert & Oshawott 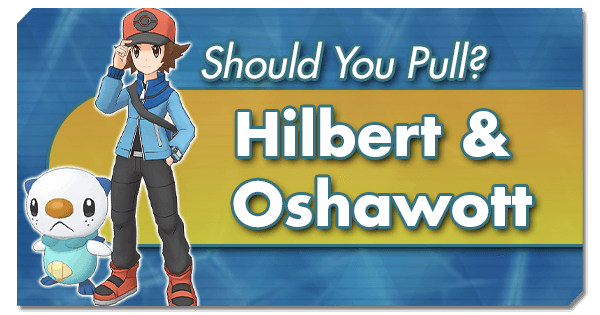 Oshawott, the pon-pon Pokémon of Pokémon Masters, is a Support Unit who believes in the power of friendship. Oshawott is there to cheer on and raise overall team morale by boosting their Speed, and when in a pinch will increase the overall Attack stats for a final showdown, ensuring that your team will always be in a position to brawl with the enemy.

Oshawott comes with amazing defensive stats. Both his Defense & Sp.Def are very high, so Oshawott is easily able to tank damage from both Physical and Special attacks.

X Speed All raises the Speed of all allies by +2, which allows the team’s Move Gauge to replenish at a higher rate.

His other signature buff is “In This Together!” The less health Oshawott has, the stronger this support move will be. Hilbert will raise the entire team’s Attack stats depending on Oshawott's lost HP, starting at +3 Attack at full HP.

As you can see, Hilbert & Oshawott are the perfect cheerleader duo to always make sure your entire team is loved and cheered on to perform their best.

Impervious is the reason Oshawott refuses to back down even in tough fights. Impervious prevents Oshawott from losing any stats at any time. In the event that a Trainer does raise Oshawott’s stats via buffs, those increases are effectively permanent until the encounter is over. This gives Oshawott the potential to be the bulkiest unit in the game for the longest time.

While Hilbert does have supportive moves that can raise Oshawott’s personal offensive capabilities, “In This Together!” relies on Oshawott being at low health. Practically speaking, this means that we are talking about Oshawott’s last moments on the field before he has to retreat and rest. In a game plan focused around efficiency, there is little room for Oshawott to be on the offense.

“In This Together!” is one of the strongest support skills in the game which Hilbert can use. The support skill raises all Sync Pairs’ Attack depending on how much health Oshawott has remaining, and this can be categorized in four brackets.  At full health (100%), the move will raise all allies’ Attack by +3. At 99% or less, it will increase by +4. At 50% or less, the attack will be increased by +5. Finally, at 33% or less, Attack will be buffed by +6 (max!).

In Co-op, currently everyone loves Olivia & Lycanroc, so we will show an example of how its best to use Hilbert & Oshawott for current state of the game. One should find two allies with Lycanroc. Turn 1: Start out with Hilbert & Oshawott, and use “In This Together!”, buffing your ally Lycanrocs’ Attack by +3. Turn 2: Switch In your own Lycanroc. When an enemy is about to use their Sync Move, Switch In your Oshawott again, so that Oshawott takes damage. The less health you have the better, as you can now use “In This Together!” again with a larger Attack bonus.

If you are looking for Co-op friends or help with completing a challenging encounter, please feel free to join our Discord!

Before we can do a comparison, we need to realize that Oshawott is a Physical Attacking Support unit, which means one shouldn’t rely on Oshawott when using Special Attacking Striker Sync Pairs. So for comparison, one could say that Hilbert & Oshawott is a stronger version of Liza & Lunatone, as Liza can do +2 Attack, where Oshawott can provide equal Attack (or more) while also providing Speed.

Phoebe and Dusclops, on the other hand, also provide an Attack boost, although at a lower value (their “Unbreakable Bonds!” starts at +1 Attack bonus, up to +4 at low HP). What Phoebe provides that Hilbert does not is Dire Hit All + (+2 Critical-hit rate), while Hilbert instead provides X Speed All (+2 Speed to all). They can be complimentary, as Hilbert can buff Attack more quickly while Phoebe focuses on Critical damage. Hilbert also can rebuff Attack much more quickly than Phoebe can. However, Hilbert by no means replaces Phoebe, as he does not have the “Pass It On!” passive (transfers any stat bonuses to an ally upon fainting). Their distinct type coverage also makes the two worth having separately.

In the current state of the game, their ability to provide Attack up +3 at the start of an encounter, and then up to +6 later on, is very valuable for our current Lycanroc Meta, followed up by Oshawott tanking a Sync Move, which results in an even stronger “In This Together!” buff.