Should You Pull #26: Morty & Drifblim 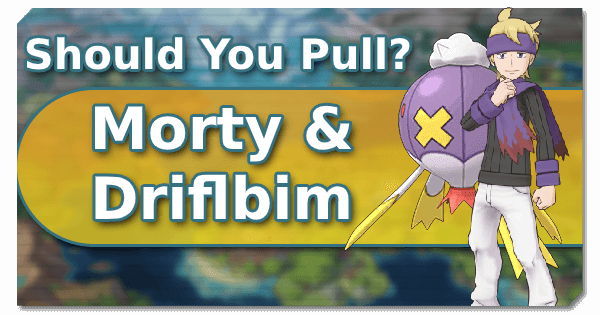 -A Strike Sync Pair that functions more like a Tech Sync Pair.

Sp. Def Down
Crit Chance Up
Self Destruct on Death
Baton Pass

Only Stat passer with access to Critical Hit rate buffs

While Pass It On is only usable in Co-Op, it does still make Morty a unique Sync Pair. Running him allows players to quickly maximize Drifblim’s Critical Hit rate through Dire Hit +, then pass it to a Strike Sync Pair that cannot raise his/her own Critical Hit rate, like Steven Stone and Metagross. This also allows for some fun gimmicks with dedicated stat passing teams in combination with pairs like Eevee and Xatu.

Drifblim actually has a usable Base Attack, improving the efficiency of Attack boosts. This also increases the damage dealt through Last Word, which can come in handy in single player stages where Pass It On is unusable. When used right, it can quickly eliminate opposing side Pokemon and clean up the field.

+2 Attack and +1 Evasiveness, with a buffing condition that is contingent on Drifblim being afflicted with a status condition, is pretty subpar, even if factoring in the Base Power of Phantom Force and Drifblim’s usable Base Attack.

While Phantom Force is a Quick Move and doesn’t cost Move Gauge to use, there is a hard usage limit of 3, that can only be increased through Move Point Refresh nodes that aren’t a surefire guarantee. This weakens consistency and drains the player of valuable Sync Grid Energy to maximize Drifblim’s potential. This can result in Drifblim being forced to rely on Shadow Ball for damage, which is costly and requires dual bladed support..

Outclassed by other Ghost Type Strikers

-Decent Sync Pair that is usable.

-Not an absolute must-have for players short on gems.