Should You Pull? Allister & Gengar 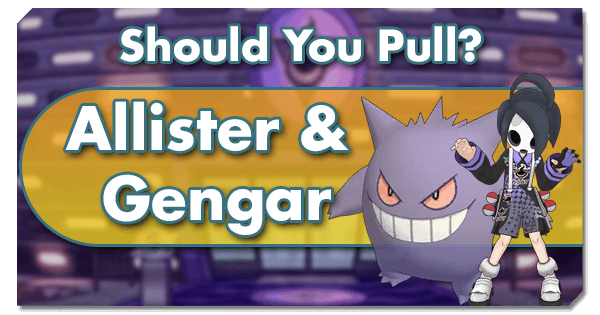 A Shyguy that crossed over from the Mario universe by mistake and now hides its plumber-paranoia behind a ball-spitting poisonous ghost.

The Halloween units think spookiness is their ally. But they merely adopted the spook; Allister was born in it, moulded by it. Very quietly teased in the 2-year anniversary video, Allister & Gengar are here to spook it up for one and all. With the powers of two unique kinds of spook on their hands, they’re ready to haunt this game and show the world just what ghosts can do! ...as soon as Allister stops crying in the corner.

To start with, let’s review Allister & Gengar’s stats. Their Speed and Special Attack are both nice, falling into the upper echelon of Sync Pairs to date. Their attack is lackluster, and their bulk is fairly low, though slightly higher on the Special-side. Move-wise, we have yet another Dynamax Sync Pair with three attacking moves; Shadow Ball, Sludge Bomb, and Drain Punch. Shadow Ball we’ve seen many times before, and Sludge Bomb is nearly the same move except Poison Type with a chance to poison instead of dropping Special Defense. Drain Punch, meanwhile, is a 3-bar Fighting Type HP-stealing move that’s fairly similar to Horn Leech on Sycamore & Xerneas. The one problem here is the fact that it’s a Physical move, meaning Gengar won’t be doing much damage/recovering much HP with it in general. Their Trainer Move is called No Escape!, and it provides +2 Special Attack, +2 Critical Rate, and the Free Move Next effect while clocking in at 2 uses. Honestly, not bad at all! Their skills are Held Hostage 3, which powers up moves if the target is restrained, Toxic Power 3, which powers up moves if the target is poisoned/badly poisoned, and Hostile Environment 3, which increases the odds of moves with secondary status effects (in this case, Sludge Bomb) actually taking effect. With moves and skills out of the way, let’s look at what we get from Dynamax! Since they’re all basically mini-Sync Moves that can be called on at will, we’ll just look at the secondary advantages that they each bring to the table. Shadow Ball becomes Gigantamax Gengar’s signature move; G-Max Terror. This move applies the Restrained effect to all enemies. Sludge Bomb becomes Max Ooze, which raises the party’s Special Attack by 2 stages. And, finally, Drain Punch becomes Max Knuckle, which raises the party’s Attack by 2 stages.

In terms of utility, Allister & Gengar actually have a lot going for them. They clock in as a bit weaker than Lillie & Lunala in terms of Ghost damage, but with the advantage of being able to blow up the field with G-Max Terror at any time. As a Poison attacker, they basically take that throne, as their Poison set is very strong overall and can do a lot of damage if set up properly. As a Fighting Type attacker… they exist? Yeah, this would be a desperation move to use them for their Fighting prowess. But regardless; they can come in and do an excellent job of managing two different types, which is always appreciated!

But, well, it’s not all great for Allister & Gengar. While their damage is very nice, it’s not exactly jaw-dropping. And we also have the issue of their being a Tech in name-only, as their only REAL tech functions are setting the Restrained status and poisoning, neither of which is great on their own. They’re also a bit cumbersome to add alongside other Strikers, as their good speed doesn’t always make up for the cost of 3-bar moves without a bit of move gauge management. It’s also worth mentioning that setting the Restrained status can be a hassle for Poison builds, as it requires either using G-Max Terror over Max Ooze, or picking up the Grappling Sync tile from their Sync Grid to set. This might be easier to deal with in the future as a more diverse pool of Sync Pairs capable of setting the Restrained status enter the game, but for now it’s just a bit awkward.

Most players simply resort to strong neutral attackers or stall strategies when Poison-weak stages show up here, so Allister & Gengar can be a bit of a niche ace for this game mode if seeing the Poison icon listed in weaknesses inspires dread. They also have the advantage of being solid on the Ghost side, but that has a bit more competition.

Status Damage in Poison, and Status Effect in Restrained. Allister & Gengar definitely have a bit of utility here, and their high damage can be very useful at times, but they also don’t genuinely stand out to a huge degree.

Outside of stages weak to Ghost and/or Poison, Allister & Gengar don’t really shine in this game mode. They’re not bad, but they’re not great either.

About the only real advantages here are once-per-stage buffs to team Attack or Special Attack via Max Moves, or the ability to spread Poison. Those scenarios aside, they aren’t making any waves.

These are generally the most important tiles on Allister & Gengar’s grid:

What’s that? You want to know what Lucky Skill to use? Why, Mad Strength 2 is the… I can’t even finish this joke; just use Critical Strike 2 again.

As a Sync Pair that focuses a bit more on Super Effective damage, Allister & Gengar enjoy the company of Red & Snorlax, as their ability to enable the Super Effective Up Next effect can be tremendously useful, especially on a Max Move or Sync Move. Nessa & Drednaw and Selene & Decidueye are also great partners, as they can set the Restrained status for Allister & Gengar, freeing up damage and options as a result. Sygna Suit Leaf & Venusaur can tank exceptionally well and provide an easy AoE Toxic Poison effect, which can be especially useful to Shadow Ball sets. Honestly, the choice of partners for Allister & Gengar can vary a fair bit depending on their strategy. Poison attacker, Ghost attacker, and Sync Nuker all work best with slightly different teams, so building a team to maximize your goal for a given stage really is key to allowing Allister & Gengar to shine. This isn’t to say that they are rigid and must have specific Sync Pairs in order to operate; they can operate on their own decently well, but they definitely aren’t going to be winning any damage-output awards in that capacity.

So with Halloween mere days away, is it worth it to add this spooky shy guy and his grinning ghost to your team? Honestly, probably not. Allister & Gengar can be useful, but they’re likely going to be niche for many players. We are overdue for a strong Poison Type attacker, but these two just don’t cross the line quite far enough to make calling them the Sync Pair to make Poison a real type justified. They’re entering the main pool after this, so don’t feel too bad about skipping them and saving some gems along the way.

Allister just wants to be left alone, so leave the poor kid alone for now.