Should You Pull? Anniversary May & Latias 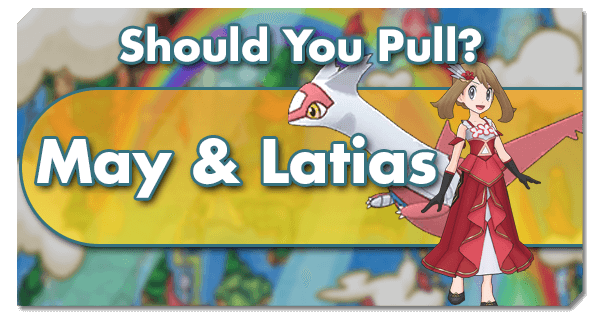 A unique Sync Pair that sports high damage output and outstanding move gauge management due to being able to attack for free on Psychic Terrain.

The 2.5 year Anniversary Celebration is long since in full-swing, and the one who ushered in the event is May, who is partnered with our Legendary Arena boss-turned-ally, Latias. The first of four new Sync Pairs for March, they are stand-out for their high damage potential, great supportive capabilities, and nearly unparalleled move gauge management. They have hit the game in a big way, so let’s see just what makes them worthy of a spot on your team.

May & Latias have a solid Special Attack stat that goes up substantially on Mega Evolution, solid Speed, and middling bulk that leans toward Special Defense. Their only attack is Mist Ball, which is a Psychic Type, 3-bar move with decent damage and a 50% chance to lower the target’s Special Attack... and we’ll revisit this move soon. Next up is Psychic Wish, which sets Psychic Zo-...er… Psychic Terrain. This is a very valuable effect that powers up Psychic Type moves for the entire field while active, and has a few other benefits that we’ll discuss soon as well. X Special Attack All is next, and yes; you did read the word “all” on that move. Best Friends! rounds out May & Latias’ trainer moves. It’s a single-use move that grants +2 Defense and Special Defense, +3 Critical Rate, and also enables Move Gauge Acceleration on use. Finally, Friendship Forging Mist Ball is May & Latias’ Sync Move, and it has two effects: it enables Mega Evolution, and it deals more damage based on how much the target’s Special Attack has been dropped, which ties it back to Mist Ball perfectly.

Next, let’s look at May & Latias’ passive skills. Added Insult is first, and it boosts move damage based on how much the target’s Special Attack and Special Defense have been lowered. This is a nice, snowballing effect, but half of it all but requires team support, as May & Latias can’t lower a target’s Special Defense naturally. Next up is Psychic Freebie 9, which is a monster of a skill that grants outright free use of Mist Ball while Psychic Terrain is active. This allows May & Latias to sit alongside powerful, gauge-hungry Sync Pairs without having to divide resources along the way. Finally, On a Roll 1 increases the odds that Mist Ball will successfully drop the target’s Special Attack, and this skill is traded out for the outright superior Unexpected Benefits x2 on Mega Evolution. This skill has the same basic effect as On a Roll 1, but adds to that the ability to double stat-drops, making Mist Ball score -2 Special Attack per use.

May & Latias are yet another Tech unit with a solid focus on dealing damage rather than just softening up the opposition for the team, and they follow in the steps of Lucas & Dialga in their largely self-contained offensive buffing capabilities compounded by their ability to self-set a helpful, team-wide boost while also throwing a bit of Supportive function into the mix. With Psychic Terrain active, they are capable of high Psychic Type attack and Sync Move damage in-and-of themselves, and the fact that they take absolutely no Sync Move Gauge to attack on said terrain means that they can pair up with power-house Psychic Type attackers for tremendous damage-output in short order. All-considered, this is a very strong Sync Pair.

Weakness-wise, May & Latias don’t have too much to worry about. The most obvious issue has to be their reliance on Psychic Terrain, but that’s honestly not much of a liability in practice. While their peak-performance ends when Psychic Terrain ends, they still have at least 2 full Sync Move cycles to play with on average, and solid performance even after that. Arguably, their largest actual issue is probably the fact that they can’t drop the enemy’s Special Defense naturally, which leaves a part of their base kit and a quadrant of their grid lying dormant outside of team help. This actually is a bit of a problem, as the game currently has a distinct lack of Sync Pairs capable of reliably cutting into the opposing team’s Special Defense.

The ability to set Psychic Terrain alone makes May & Latias potentially very valuable here, and their ability to basically get out of the way and let another attacker do their thing means that they can set up some very strong team-damage. When combined with the right Striker, this team comp is even a great choice for neutral stages.

If a burst of terrain-boosted team damage is your goal, then May & Latias are happy to oblige! They are solid picks for any stage where simply overpowering the opponent with sheer team damage is the big goal, or can be a huge part of an outright win-condition should a Psychic weakness show up in the future.

Psychic Terrain and free moves make May & Latias pretty flexible, so they’re fine picks for stages that don’t lock them out due to specific gimmicks.

A lack of passive boosts is awkward here. Lowering enemy Sp.Attack is something, but it’s just not enough to warrant much use.

May & Latias are great even at ⅕, at least in a slightly more supportive function. If you want to use them for their own merit, then ⅗ really should be your goal, as that’s when their Sync Nuke power becomes available. Sadly, ⅖ doesn’t really add much to them, so your best options are to leave them at ⅕ for their base kit, or invest in ⅗ for the whole kit.

The obvious pick is, as always, Critical Strike 2, for its solid all-around damage output. However, an argument can be made for Mind Games 2 from the deluxe set, as it grants a chance to lower enemy Special Defense to take advantage of Added Insult, Brainteaser, and Smarty-Pants, as well as doubling up to 2 stat-drops per activation thanks to Unexpected Benefit x2. Super Powered 3 can provide maximum damage output if you intend to strictly use May & Latias on Psychic weak stages, but the damage difference between this and Critical Strike 2 is negligible, and the latter adds more versatility.

May & Latias are made to work with other Psychic Type attackers, and a few top picks include Lusamine & Necrozma, Giovanni & Mewtwo, and Lear & Hoopa are ideal partners. All of the above love having May & Latias around, with Giovanni & Mewtwo in particular also taking full advantage of X Special Attack All, though both pairs want to Mega Evolve ASAP, so it can be a bit awkward at times. However, May & Latias can also work as the main attacker on a team to a certain degree, making less prominent attackers like Caitlin & Reuniclus or Professor Oak & Mew good options to help keep up consistent damage. Going even deeper than that, May & Latias don’t strictly need to be paired with Psychic Types, and can still perform well on their own when paired with off-type attackers like Diantha & Keldeo or Lillie & Lunala.

When gathering support for May & Latias, solid walls that can help out with Special Attack, such as Elesa & Rotom or Elio & Primarina, are standard for keeping the team alive and capping off offensive powers. That aside, what May & Latias really appreciate is a bit of help with dropping enemy Special Defense. On this front, Jasmine & Celesteela, Dawn & Alcremie, Raihan & Flygon (with the proper Sync Grid build) and the previously mentioned Diantha & Keldeo are all great partners. An often-overlooked, free-to-play pairing that works well in this capacity is Erica & Vileplume, as they can actually tank surprisingly well and score Special Defense drops fairly frequently with the right grid setup.

Overall, May & Latias definitely justify their potential investment with a lot of return. They have high offensive presence that makes them fairly comfortable taking on the main attacker role, but also nearly unrivaled flexibility that practically begs to pair them with another attacker, setting up absurdly fast stage clears as a direct result. They are definitely worth an investment, but keep in mind that they are in direct competition with the other first-wave Anniversary units, as well as the absolute monster that is Serena & Zygarde, so consider your investment strategies carefully before making the dive.