Should You Pull? Bea & Vanilluxe 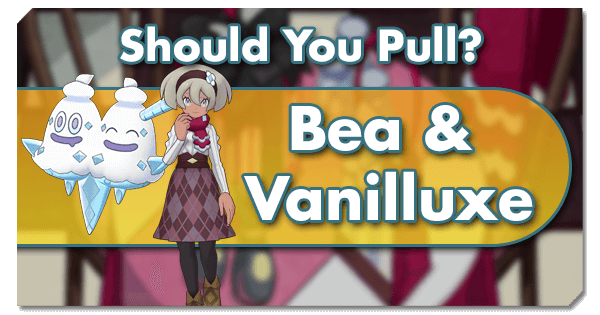 Feeling more at home in December than February (though I guess that February is still a part of the winter season in the northern hemisphere), Bea has made her appearance for this heart-felt holiday alongside Vanilluxe, the… dual-icecream cone. Wait, isn’t Bea sort of known for her low-key love of sugar? … oh dear.

So what exactly is the most important stat-factor for a Support unit? Arguably, it’s going to be bulk. And how do Bea & Vanilluxe fare on that front? … not that great, actually. Their bulk is a bit slanted towards Special Defense, and is definitely on the low side to the point where they are not that hard to take down. But we’ll revisit their bulk a bit later, as looking at the stats alone can be very deceptive. Attack and Special Attack don’t really matter here, and Speed also leaves much to be desired. In short: their stats aren’t particularly impressive, but that just means that getting this pair to EX will provide a larger relative stat-boost than for many other pairs.

Next up is Bea & Vanilluxe’s moveset. Let’s Share! is first, and it’s a 1-use Trainer Move that provides +4 Attack and Special Attack to the whole team, alongside one stack of the Physical Attack Up effect if Hail is currently active. If it wasn’t obvious before, I’m sure that you now know exactly where we’re going with this Sync Pair. Next is Potion, which is always a handy little skill to have available. Icicle Spear is the first attacking move, which hits 2-5 times for meager Ice Type damage. Finally, Astonish is a handy little attack that can cause the target to flinch at a meager single-bar cost.

The last core data-point to analyze on this Sync Pair is their passive skills. Cold Front starts the list, and it sets Hail when Bea & Vanilluxe hit the field. Next is Hail and Hearty, which provides a huge 30% boost to Defense and Special Defense while hail is active, taking their previously mentioned low bulk and putting it near the top echelon of all Sync Pairs. Seriously; this one skill alone is a massive help, as it basically puts a giant, icy bandaid on their basic frailty. Finally, Snow Shelter is a staple for hail units, as it prevents hail damage that would otherwise whittle away at their health.

All-in-all, Bea & Vanilluxe are solid, if somewhat limited in their effective scope. When hail is up, this is one of the single bulkiest units in the game, with dual-MP-Refresh on Potion to flex that augmented bulk even more. Their Trainer Move is ideal for many attackers, as it fills in the gaps in their own kits or allows for faster setup, and the Physical Attack Up Next bonus that it provides under Hail is just icing on the cake… or maybe topping on the ice cream in this case? In short; if you’ve got a Sync Pair that gains benefits from Hail, then they are begging you to use Bea & Vanilluxe to help get their job done. And even if they don’t appreciate a good winter storm, Bea & Vanilluxe can still pull their own weight fairly well!

But in every life a little rain must fall… or hail, in this case. Outside of Hail-teams, Bea & Vanilluxe are just fine, but they’re fairly vanilla for a Support unit, pun intended. They offer some nice buffs, but have little to really set them apart on most teams, and even harass their own team with Hail damage. And speaking of Hail; unless you pick up Snow Sentinel 9, Bea & Vanilluxe will become relatively squishy once Hail ends. It’s possible to just pick up Hail Bringer on their grid to restore Hail with every Sync Move use, but using Bea & Vanilluxe to Sync after their first, EX-boosted Sync Move is generally a very sub-optimal strategy, as their damage is extremely lackluster. We also have the limitations of their buffing profile to bring up, as +4 Attack and Special Attack is nice, but it limits effective team building to some degree as it’s far from complete. It’s also worth mentioning that the Physical Attack Up next effect does make them more effective when paired with Physical attackers, but that’s less a liability and more a bonus to one half of their potential teammates.

Bea & Vanilluxe will tend to only be super-useful here when an Ice weakness comes up, at which time they can work wonders alongside Hail-loving Sync Pairs to enable higher damage output and faster buffing. That said, they can be nice for general teams given their high bulk and aggravating flinch utility, especially if finishing before Hail ends is viable.

The ability to Flinch via Astonish can be useful on select stages, though lessening returns on the effect can render it less useful over time. Bea & Vanilluxe’s high bulk is definitely nice here, especially when paired with Hail-loving Sync Pairs, and their weather-centric capabilities can actually be fairly useful on stages that use weather-gimmicks like Moltres with a bit of proper planning.

The gimmicks of these stages can leave Bea & Vanilluxe a bit out of their element. They’re okay here, but you’re going to need solid team support and/or the ability to play into the stage’s theme to excel. Their Galar Theme Skill is useful at least, as we don’t yet have a ton of Sync Pairs that sport it.

With a bit of Grid-based help, Bea & Vanilluxe can potentially give +1 Critical Rate to the team and max their own Defense/Special Defense so that they can tank well even outside of hail. They also have the classic dual-MP-Refresh tiles for Potion that can make them worth throwing into a stage for a quick MP-gamble. To top this off, their single-use skill has an MP Refresh tile, so it’s possible to just reset repeatedly until it activates for pseudo-consistent buffs. While definitely not the best choice for this job, you could also do much worse.

These are generally the most important tiles on Bea & Vanilluxe’s grid:

If you don’t nab it on the grid, then Vigilance is the winner from the normal pool of Lucky Skills. This is especially true if you plan to pick up Snowy Sentinal on their grid, as a random crit once Hail ends can cut their defense buffs and outright mutilate their base bulk. Deluxe Cookies offer Revenge Boost 4, Status Immunity, Interference Immunity, and Healthy Healing, all of which offer very real advantages that are worth considering.

The winners here are Leon & Calyrex and Steven & Alolan Sandslash, both of which have great synergy with Bea & Vanilluxe. Their unique skills work together perfectly to result in some particularly brutal Hail strategies that can easily cut through even neutral stages with little effort. Other note-worthy Hail-synergistic pairs include Nessa & Eiscue or Candice & Abomasnow for their ability to set Hail on command, or Hala & Crabominable for their ability to deal even more damage under Hail. Lesser options are Rosa & Delibird or maybe even Glacia & Glalie for their Hail-synergy, but running them alongside Bea & Vanilluxe is pretty redundant most of the time.

Moving on from Hail teams, Bea & Vanilluxe are actually just fine on normal teams. If Ingo & Excadrill have taught us anything, it’s that even irritating weather like Sandstorms or Hail can work with Sync Pairs that don’t directly synergize with them, though Bea & Vanilluxe don’t quite work as well in this capacity as everyone’s favorite train conductor/mole pair. Sync Pairs with imperfect offensive buffs like Cynthia & Giratina or Dianth & Keldeo appreciate the top-off to their stats, while Zinnia & Rayquaza love the stats and weather alike.

This one is a bit polarizing, in truth. If you already have Sync Pairs that enjoy the use of Hail like the aforementioned Steven & Alolan Sandslash or Leon & Calyrex, then Bea & Vanilluxe can be a huge boon to your team that can help them power through to victory all the easier. If not… then they’re probably going to be a bit underwhelming. As discussed above, they’re not bad on their own, but they aren’t likely to be your team VIPs extremely often. Also, if you’re going to pull for Bea & Vanilluxe, we recommend that you first speak with your personal/professional insurance agent to see if all of your currently held policies cover hail damage.