Should You Pull? Blue & Aerodactyl 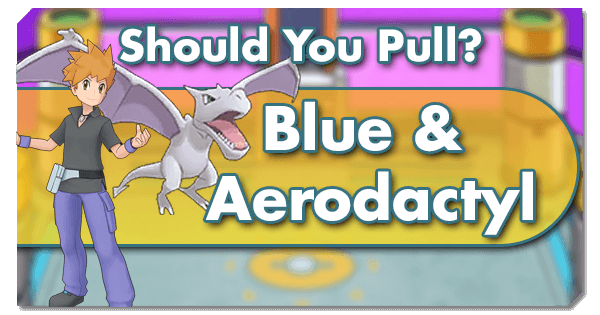 A phenomenal Rock Type Striker with high power, great versatility, and even a bit of Supportive function mixed in for good measure.

Blue has never been a trainer to disappoint. Right after the start of the game he joined us with Pidgeot and set the early standard for a “good” striker, and then he hit the game like a storm at the one year mark with his Blastoise to redefine the term Support. And now he’s back again on the coattails of the 2-year celebration, ready to join the fight against Giovanni with his Aerodactyl. Can he redefine the game yet again with his prehistoric beast of the sky?

To start with, let’s break down this Sync Pair a bit. They have solid Attack and Special Attack that become very nice once Mega Aerodactyl hits the field, blazing Speed that puts them on a par with many of the fastest Sync Pairs in the game, and defenses that aren’t really doing them many favors. Move-wise they have Hyper Beam and Ancient Power, with Double Edge showing up post-Mega Evolution. The fact that they have multiple powerful Normal Type attacks should already shed some light on their skills! Their Trainer Moves are Dire Hit All+... yes, that is Dire Hit ALL +, so these two can actually come in and max the entire team’s Critical Rate alongside their own! This move is also replaced by the aforementioned Double Edge when Aerodactyl Mega Evolves. For the last Trainer Move, we have Bonjour! (I can hear the way that he says it just writing that…), which has 2 uses and provides +3 Attack and Special Attack, and an additional +3 Speed if used by Mega Aerodactyl. Finally, let’s look at skills. Rock Shift was a bit telegraphed, as it turns two mediocre attacks into Rock Type bombs just ready to go off. Combo Freebie 2 has a 30% chance of granting the Free Move Next effect any time Blue & Aerodactyl attack, potentially making them extremely gauge-friendly. Finally, basic Aerodactyl has Endure to help ensure that it has the survivability needed to Mega Evolve, and Mega Aerodactyl replaces it with Recoil Removal, which drops the recoil damage from Double Edge entirely and leaves no real drawbacks at all to its use.

With all of these composite parts put together, it’s safe to say that Blue & Aerodactyl are great… like, really great! They are easily on a par with their main competition, Emmet & Archeops, in terms of damage. They have the potential to even compete in a Sandstorm if given the right Sync Grid build while still offering up a tremendous amount of adaptability and usability that Emmet & Archeops lack, not the least of which is the ability to operate with high efficiency even outside of a Sandstorm. And speaking of adaptability; these two are also outstanding even in neutral stages, because they have great gauge management. High base speed, the ability to buff or even self-max speed if Bonjour! is used post-Mega, the ability to attack for free on occasion, and even the option of using a 3-bar move instead of their 4-bar move without a huge damage loss means that they play very well with other powerful Strikers, and can form a dual-striker core that offers substantial flexibility in terms of a Support unit! And while it’s not super relevant as of this writing, their ability to effectively attack from both the Physical and Special side of the spectrum allows them additional adaptability on stages that heavily favor one method of attacking over the other.

Now that the gushing is out of the way, let’s look at the weaknesses that Blue & Archeops have to contend with. For one, they are not bulky. While not paper-thin like Lusamine & Pheromosa, they definitely fall on the lower end of the defensive spectrum, especially after their trainer move drops their Defense and Special Defense. They also have the double-edged sword that is Mega Evolution to contend with, as they don’t really attain their outstanding potential until a bit later in the game, and they don’t play quite as well with EX Support Units that work best if given an early Sync Move. This is compounded a bit by the fact that their trainer move only gives speed post-Mega Evolution, so the question becomes do we use them early to start hitting like a truck after the first Sync Move, or waste a bit of time with less than amazing Hyper Beams before Mega Evolving in order to get the full effect of the skill? And remember how the previous section gushed about how good they are when compared to Emmet & Archeops? Well, that’s not the whole story. While Blue & Aerodactyl sport better long-term power and flexibility thanks to the fact that they don’t have to rely on Sandstorm for the lion’s share of their power, Emmet & Archeops have a comparatively beat-down style and can come out swinging for huge damage while Blue & Aerodactyl are still getting their gloves on, making them very competitive in their own right. We also have the fact that Dire Hit All +, while great, can be redundant with a lot of top-tier Support units, meaning it’s not quite as game-changing as it appears on the surface.

Great power, outstanding move gauge management, and high flexibility come together to make Blue & Archeops an outstanding choice for Rock weak stages, as well as neutral stages when paired with other powerful Strikers. Their performance can be genuinely stellar here, and they will likely turn out to be one of your aces for the mode.

We already have one Rock weak stage with Moltres, and Blue & Aerodactyl’s synergy with Sandstorm lets them shine here. Their theme skills aren’t likely to help in many challenges, though.

Cutting through these fights as quickly as possible can be extremely helpful, and Blue & Aerodactyl are definitely up for that job. Just watch out for heavy AoE moves like Surf or Earthquake that could score early KOs!

Reliant on buffs and frail, Blue & Aerodactyl generally are not great in the Villa. They can be nice to call in for one or two difficult stage clears, but they’re really not designed for the long-term requirements of this game mode.

These are generally the most important tiles on Blue & Aerodactyl’s grid:

NOTE: the above information has been proven wrong. Head Start 1 does not take effect on Mega Evolution, unlike similar skills that will take effect a second time. My apologies for the incorrect information.

Lucky Skills
Oh look, yet another Striker. I wonder what Lucky Skull we should roll for on this one? Say it with me; Critical Strike 2.

Let’s get this out of the way: put Blue & Aerodactyl with Emmet & Archeops and Ingo & Excadrill, and watch the world become buried beneath a literal mountain of rock and sand! This combo has HUGE synergy, and offers absolutely devastating Rock Type damage output that will make basically any Rock weak stage an absolute joke to crush. If you already have Emmet, Blue is still very much worth adding to the team.

So what else works well with Blue & Aerodactyl? Well, we’ve talked about dual-striker setups throughout this article, so let’s start there! Strikers like Easter May & Lopunny or Gloria & Zacian have their need for Critical Rate buffs filled by Blue & Aerodactyl and have their own ways of going easy on the move gauge make for amazing offensive synergy while opening the door to more Support options at the same time. Synergy can also be found with the vast majority of strikers, as Dire Hit All + can lessen their setup time, and the flexibility of Blue & Aerodactyl lets them stay largely undemanding.

But how about their pairing with Support units? As stated, the Critical Rate buffs provided by Dire Hit All+ means that Critical buffers aren’t mandatory partners for select sync pairs, so more offensive Support units such as Professor Sycamore & Xerneas, Lillie & Clefairy, or Holiday Rosa & Delibird can do their job to the fullest, while Support units with incomplete Critical Rate buffing capabilities like Sygna Suit Elesa & Rotom or Kiawe & Marowak can rest assured knowing that the job can be done without fishing for MPR and allowing them to spend turns providing other form of utility. It’s also worth noting that Blue & Archeops’ self-sufficiency also opens the door for Red & Snorlax to come in and provide huge damage boosts with the Super Effective Damage Up Next effect without having to worry about providing other buffs for the most part.

So did Blue set a new paradigm like he has twice in the past? Maybe not quite, but he did manage to offer a mix of flexibility and power that is very hard to directly rival, especially given the extra freedom that having a Striker that can max the team’s Critical Rate can bring. Blue & Aerodactyl have a bit of stiff competition, but they stand as one of the best Rock Type attackers in the game, and an outstanding general pick that can bring serious pain with ease. They’re among the most adaptable Strikers that we’ve seen to date, and bring a lot of versatility and value to the table. If you can work around their few flaws, then they can definitely pay back their cost, as they’re more than ready to hit the majority of stages that they may face very hard!