Should You Pull? Diantha & Keldeo 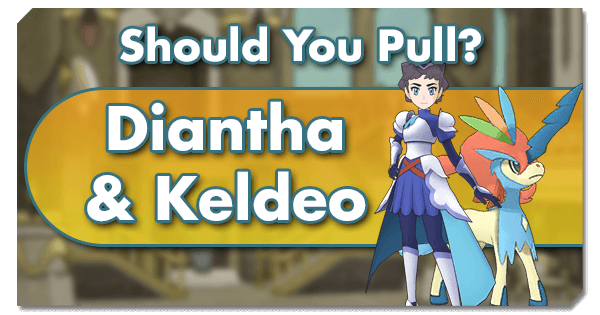 With Halloween now behind us, the time to go to war has come! The Poke-War Games event is already underway, and Diantha & Keldeo lead the way towards victory. Their power and team work is definitely impressive, but is it going to be enough to make them worth a gem investment in order to pick up? Let’s take a look!

As always, let’s begin with stats. Diantha & Keldeo have great Speed and fantastic Special Attack, which sets them up perfectly for what they want to do. Their Attack doesn’t matter, and their bulk isn’t the greatest, but they have exactly what they need to succeed stats-wise.

Next, we come to moves. In general, only two moves really matter on Diantha & Keldeo: Secret Sword, and Strike True!. The former is a high-BP, four-bar Fighting Type move that deals damage based on the target’s Defense rather than Special Defense. It’s basically a Physical move that uses Keldeo’s Special Attack. The latter is their trainer move, and it provides +3 Critical Rate, +4 Special Attack, and the Gradual Healing effect in its single use. Despite the fact that the Special Attack buffs aren’t perfect, they’re still ample for most current content, and can easily be finished up by a number of Support units.Going beyond these, Move Gauge Boost grants a quick three Move Gauge bars per use, and Aura Sphere is a substantially weaker two-bar move that never misses. Finally, Their Sync Nuke has the same “deals damage based on the target’s Defense” effect as Secret Sword, and has a built-in power boost that grows as Diantha & Keldeo’s Defense rises.

Passive Skills… Oh boy, this is where we start to have a lot of fun. Diantha & Keldeo have basically the same skill three times, with each affecting a different stat. Armor Leech 9, Mind Leech 9, and Speed Leech 9 drop the opponent’s Defense, Special Defense, and Speed respectively with every single attack made, and then they boost Diantha & Keldeo’s Defense, Special Defense, and Speed as well. While it will take time to max out these effects in most battles, it’s still a stellar combo that helps out both offensively and defensively.

Well, we have the basis for Keldeo & Diantha… so now let’s discuss their advantages: They mess their enemies up.

…what, we need more? Okay, fine. Diantha & Keldeo are surprisingly simple and elegant in their execution: deal high damage that snowballs with each attack posed. They have high damage output that draws from multiple sources and constantly growing bulk and speed as well. And do you think that just maybe that’s enough? Well, we’re not through ladies and gentlemen: they also get three methods to boost Sync Move damage based on stat-drops on the target! When considering their Sync Grid. Care to guess which three stats these tiles interact with? That’s right: Defense, Special Defense, and Speed. And we also have a way to boost move damage based on Defense boosts, making this even more hilariously synergetic. This Sync Pair snowballs very hard, and then charges in with a Sync Move sword to the heart for a finisher. Their entire kit just flows extremely well with itself!

So it can’t all be sunshine and swords for Diantha & Keldeo, right? They have to have a weak side. Well… kind of? They can’t quite max out their own Special Attack, so a Support unit that can provide +2 Special Attack is definitely appreciated. They also don’t have the absolute highest special attack damage, as they lack outside boosts such as Weather and Terrain bonuses, though their other indirect damage buffs mitigate this issue quite a bit. All-in-all, these are not huge issues, and Diantha & Keldeo are still very reliable and powerful.

Diantha & Keldeo can reliably crush Fighting weak stages, or can even join just about any team just to debuff and unleash their shining sword of Sync Move justice. Just beware of stages that are immune to stat drops in one way or another.

Since stat drops carry between health bars and most Legendary Arena stages are single-target, Diantha & Keldeo can be extremely useful for softening up the boss before going in for the kill.

Each of these battles tend to follow a gimmick, but a mix of reliable stat-drops and high damage is almost always a help here.

Switching to Aura Sphere actually has its merits here, as throwing out reliable stat-melting power can be exceptionally useful. They can slot in and help open up the opposition for some hefty damage, though they’re a bit less effective in multi-layer battles as they’ll need to stack some status reduction all over again. As a main attacker, they are a little hamstrung unless paired with buffing teammates due to their reliance on MP, though their strong, single-use buffing skill can be useful if you don’t mind resetting stages for MP refreshes.

These are generally the most important tiles on Diantha & Keldeo’s grid:

Sadly, this is a Sync Pair that really wants to hit the coveted ⅗. Fortunately, they’re already great at ⅕. They’re also fantastic candidates for Five Star Tech Candy due to their seasonal status and high return on investment.

Do I even need to say it at this point? Fine. Critical Strike 2 is the absolute best way to go, as it provides maximum damage output and a Sync Move boost.

First of all, obtaining the last +2 Special Attack is paramount to Diantha & Keldeo’s maximum power. A few great picks for this role are Burgh & Togepi, Elio & Primarina, or good-old Sygna Suit Blue & Blastoise. A bit of help getting Speed, Defense, and Special Defense up is also helpful, as doing it solo is a bit slow. Skyla & Swanna, Morty & Mismagius, Sycamore & Xerneas, Leaf & Eevee, or Fall Caitlin & Sableye can help on this front, allowing for stronger Sync Moves and Sacred Swords earlier in the game. In terms of team synergy, they work very well with Champion Iris & Hydreigon, as the two have perfectly complementary debuffing profiles and solid damage output. It can be a bit hard to buff both to max, but the Support units mentioned at the start of this section were specifically chosen because they’re all capable of doing the job. Most offensive Sync Pairs also appreciate the Defense/Special Defense drops that come standard on Diantha & Keldeo, but Sync Pairs that can capitalize on them on a deeper level such as Ghetsis & Kyurem can use them as a spring-board for even more impressive numbers.

Diantha & Keldeo are definite stand-outs for this event. Their offensive prowess is genuinely great, as is their adaptability. Their entire kit synergizes very well with itself and creates a fantastic overall offensive Sync Pair. But here’s the question: what about Guzma & Buzzwole, who will directly challenge Diantha & Keldeo as Fighting Type damage dealers very soon? Well, we’ll be covering those two soon enough, but for now it’s probably best to sum this competition as tremendous single-hits Vs. tactical, snowballing consistency. If you want SHEER POWER and Dynamic Punches, then it might be best to wait for Guzma & Buzzwole to drop. If a strong overall kit with high reliability and very high average performance sounds more appealing, then our dear shining knight and her loyal steed are here, prepared to show their skills and power for the good of any who pull them!