Should You Pull? Elesa & Emolga 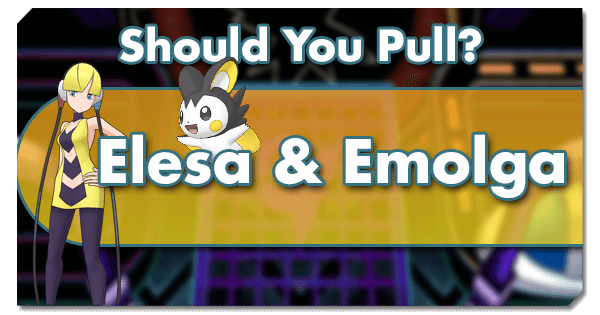 Tired of her dark hair, Elesa has decided that it’s time for another change. Maybe a change back to a more classic time? A time when the confusion of life was a bit more Black and White…? Rocking her original design, Elesa has teamed up with her Emolga, and is ready to take center-stage as she takes up the one main role that she didn’t already fill before this: Tech! With some very powerful stats-reduction power and a bit of team-support, she’s truly here to dazzle and shine!

In terms of overall stats, Elesa & Emolga have fairly high Attack, Special Attack, and Speed. They also have at least okay bulk overall, so stray AoE moves aren’t a huge deal. They sport Nuzzle, which is a 3-bar move that has middling power but 100% chance to paralyze on use, and Thunder Shock for their attacks. Light Screen is next, which reduces incoming Special Attack damage posed against the team by 50%. Finally, we come to Elesa’s Trainer Move: Sparkle and Shine!. This Trainer Move reduces the Sync Move counter by 1, grants +4 Special Attack to Emolga, and gives +2 Special Defense to the entire team. Ah, but that’s not all: Elesa & Emolga is the latest Sync Pair with access to Dynamax! This grants access to a powerful Max Lightning, which has the side-effect of setting Electric Terrain on use, or Max Guard, which protects a teammate by granting the Attack Negate effect. This is especially interesting, as this gives us precedent for a non-Gigantamax Pokemon using Dynamax.

Passive Skills are where we come to the real fun of this Sync Pair, and they all line up perfectly. Entry Freebie grants the Free Move Next effect at the start of the battle to line up an opening Nuzzle, Viral Hit 9 spreads secondary effect Status Damage to the entire team on infection, and Shock Factor 9 drops the Attack, Defense, Special Attack, Special Defense, and Speed stats of any paralyzed target that Emolga attacks.

Elesa & Emolga are downright fun in my estimation. They have one of the strongest Stat-reduction effects in the game, quick setup, high burst damage with Max Lightning, and even a bit of added Support utility as well. Their high Speed and low-cost main attack also make them very move-gauge friendly, which can be very valuable for a third-slot Sync Pair. They are the second Sync Pair capable of setting Electric Terrain as well, which gives us an additional option when it becomes useful. The use of Light Screen can also be extremely valuable on some stages, as the bulk that it adds while active is very substantial.

And, while this is definitely a fun Sync Pair, we also have a few issues to deal with. First up is their offensive presence, or rather lack there-of. With Max Lightning out of the way, Elesa & Emolga will not be dealing much damage. They can invest into Nuzzle on their Grid for a bit more power, but this is super awkward, as the high cost of the move likely won’t be offset by the lackluster output. They also have a bit of a love-hate relationship with Max Lightning, as they want to use it to set Electric Terrain, but then they can’t actually use their own Electric Terrain to boost Max Lightning, which is their only good source of damage outside of their Sync Nuke. On top of that, the single-use nature of Max Lightning means that they can only set Electric Terrain once per battle, so it had better count!

Stat-drops can be very effective here, both offensively and defensively, so Emolga & Elesa are poised to be potentially useful. Just note that some stages are naturally immune to stat-drops.

Where stat-drops, Flinches or Paralysis come in handy, Elesa & Emolga are particularly great. Their wide stat-dropping profile means that they have near-universal coverage in this case, which can be particularly useful on some stages. Flinches can also be a run-maker on some stages, and Paralysis will occasionally come in clutch. Their Gym Leader Theme Skill is also very commonly a requirement in Legendary Arena missions, giving bonus utility on this front.

In stages where Paralysis and stat-drops are viable, Elesa & Emolga can slot in and put in some serious work. But if the stage is immune or highly resistant, then they don’t have much utility.

When the goal isn’t to use Elesa & Emolga for damage, they are great in the Villa! Consistent Paralysis/stat-drops and the ability to protect the team with Max Guard or set Electric Terrain are all potentially very useful. The one problem is that they’re kind of dead weight once their main jobs are done.

These are generally the most important tiles on Elesa & Emolga’s grid:

With a focus on Sync Move and Max Move damage, Critical Strike 2 is going to be the best bet. Though Fast-Track 2 or Stoic 2 can also be useful if your goal is a pure-Tech build.

In general, we have two different ways to run Elesa & Emolga: for Sync/Max Move utility, or as a classical stats-lowering Tech unit.

For a more damage-oriented build, you’ll first need some Critical Rate support, and maybe a bit of Special Attack support as well. Sabrina & Alakazam, Jasmine & Celesteela, and Sygna Suit Blue & Blastoise are great examples of Sync Pairs that can fill this gap to get Elesa & Emolga ready to go. Support aside, Electric Terrain is great for N & Zekrom, who can turn it into tremendous damage. Volkner & Luxray are great as well, because they can set Electric Terrain before Emolga uses Max Lightning and refreshes it, and then go in for a more offensive build with the added offensive longevity that a 3rd Electric Terrain terrain set will bring. Beyond this, basically any other Striker would enjoy having Elesa & Emolga around for their Defense/Special Defense dropping capabilities.

On the pure-Tech side, we have a lot more leeway. If your Striker and Support have strong synergy, then Elesa & Emolga can slot in to basically melt the opposition’s entire stat profile. Sync Pairs that can take particular advantage of Elesa & Emolga’s skills include Champion Iris & Hydreigon, Ghetsis & Kyurem, Dawn & Alcremie, N & Reshiram, and basically anything else that can take advantage of enemy stat drops.

While very fun and unique, it’s probably best to wait on Elesa & Emolga for the time being. We’ve currently got Lusamine & Necrozma, the Christmas units, the yet-to-be-datamined New Years units, and even Valentines and the not-so-distant 2.5 year celebration to contend with, so this is a pretty risky time to spend on anything less than outstanding. We have a lot of exciting stuff on the way, so it’s a good time to be picky with those gems!